on July 28th, 2013 Posted By BG in Articles
By Maura Judkis - The Washington Post 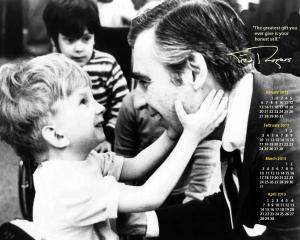 The boy’s name was Tommy Paulhamus. The “was” should tell you that his story does not have a happy ending. But on the day my father captured the now-iconic image of him with Mister Rogers in 1978, which was widely shared after the Newtown shootings — when he was not yet five years old, living in what was then called the Home for Crippled Children — Tommy was quite happy, indeed.

He was always a happy child, his mother, Beverly Paulhamus, recalled fondly. She was weeks away from adopting him when the photo was taken, and the staff at the Pittsburgh care center, now called the Children’s Institute, had told her about the moment that her soon-to-be-son had met Mister Rogers.

“They told me … he told Mister Rogers he was going to poke him in the nose,” said Paulhamus. “That’s how Tommy was, he was the life of the party.”

My father’s photo of Tommy and Mister Rogers went viral in the wake of the Newtown, Conn. school shootings, when it was used to accompany a quote from Rogers about teaching kids about violence:

“When I was a boy and I would see scary things in the news, my mother would say to me, ‘Look for the helpers. You will always find people who are helping.’ To this day, especially in times of ‘disaster,’ I remember my mother’s words, and I am always comforted by realizing that there are still so many helpers – so many caring people in this world.” — Mister Rogers

The image was shared more than 90,000 times on Facebook. It appeared on Meet the Press, MSNBC, and on PBS, where I spoke with host Ray Suarez about the photo and its impact. Many readers and viewers inquired about the child, but my father had never learned the identities of anyone in the photo — until Beverly Paulhamus came forward last week. Helene Conway-Long, the Vice President of Institutional Advancement at the Children’s Institute, was able to confirm that Tommy was the boy in the photo.

Tommy Paulhamus was born on July 7, 1973. He had hydroencephalitis, a condition where fluid collected around his brain, causing a larger-than-normal skull, and Dandy-Walker syndrome, which affected his balance and coordination. He had shunts in his skull to drain his fluids. His eyes were crossed, and his fine and gross motor skills were impared. Paulhamus said Tommy was rejected by his birth mother at a young age.

“His mother missed out on a great blessing,” said Paulhamus, who lives in Danville, Penn. “I’m glad his mother gave him up, because I got him. He would say to me, ‘Mom, what would I do without you?'”

A religious woman, she remembers praying for Tommy before she adopted him.

“I said, if this little boy is for us, have him jump up in my husband’s arms and say ‘Daddy,'” she said. “Tommy didn’t really have the ability to do what I was praying for him to do, but he jumped right up in my husband’s arms and yelled ‘Daddy!’ and I knew then that he was the boy for me. Everybody else was crying because of it. I wasn’t. I kept saying ‘Thank you, Lord.'”

She adopted him just before he turned five, and he got corrective surgery for his eyes. He was obsessed with cars. He was “a little jokester.” He was always very polite, and loved his two sisters, one of whom was also adopted. He was teased in high school for his appearance, “but he could take it,” said Paulhamus.

He graduated from high school at the age of 20, “and all of the faculty stood up and cheered,” she said. Afterward, he maintained a paper route and later was an auxiliary member of the Picture Rocks Fire Co. Though his condition prevented him from fighting fires, he helped out around the station.

Paulhamus said that Tommy died on Nov. 11, 2011 after injuries sustained in a bike accident. He was wearing a helmet and walked away from the accident, she said, but in the weeks following, suffered from seizures and pain, before dying of a herniated brain stem. He was 38 years old.

He loved Christmas, and when the family was unable to bear a another holiday at home without him this year, they decided to go to Fort Lauderdale, Fla. Paulhamus said that when she was settling into their hotel room on Dec. 18, she was flipping through TV channels at the exact moment that the segment appeared on PBS, and was stunned. To her, it was a message from above.

“I’m a great believer with faith in God,” she said. “I don’t believe in coincidence.”