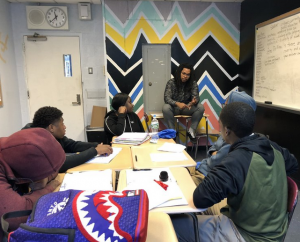 More than 40 percent of public school students in New York City are boys of color but very few of their teachers look like them. That discrepancy is one reason Aaron Harris is a teacher.

As an African-American male teacher, Harris said he wants to be a mentor to students in his English classes at the High School for Public Service: Heroes of Tomorrow. To do that, he needed a mentor, and that’s why he joined NYC Men Teach last year.

“It’s been the most integral part of why I’m still teaching,” he said.

NYC Men Teach paired him with a more experienced black male teacher at the Brooklyn school who gives him the support he then offers his own students. Since it was launched in 2015, the program played a part in hiring 646 male teachers of color for the 2016-2017 school year, according to the Department of Education. An additional 759 men of color are “in the pipeline” to become teachers in the next two years with support from the program.

But, despite some progress in recruitment through NYC Men Teach, male teachers of color comprise only about nine percent of teachers in the nation’s largest school system.

During a recent class discussion, Harris asked the five boys in his class if it mattered to them whether their teachers shared a common background or racial identity. What if, he asked, they had a black teacher who grew up in a different country?

“You’re telling me that students would just sit down and listen to him? I’m talking about from Zimbabwe, accent, no bearings with the community whatsoever,” he said.

Most said that race alone was not enough. Student Samuel Mayers said it depended more on personal rapport.

Harris and the students talked about a white male teacher at the school who seemed open to connection, which they appreciated.

For Harris, it came down to empathy.

“We serve some underserved kids. I think I come from the same kind of socio-economic background. We’ve gone through some of the same kind of experiences: single mom in the home [who is] working multiple jobs, leaving the house early in the morning, so I know the narrative and the struggles that they go through,” he said. “I can relate to them on that level and that gives me a different perspective, a different level of empathy for the things they’re going through outside of school.”

Studies have shown that having a teacher of the same race can improve attendance, performance on standardized tests, and face fewer suspensions. The effects can stretch far beyond experiences in a single class.

Having at least one black elementary school teacher reduces the probability that a black student would drop out of high school by nearly 30 percent, according to a study by a team of researchers including John Hopkins’ University professor Nicholas Papageorge.

Papageorge said he and his colleagues were surprised by how long lasting the the impact of a single teacher was on some students. It was most striking for low-income black students who might not have exposure to people in their communities with college degrees, but Papageorge said there’s another factor at play as well: “There seems to be more trust in teachers for those who had a black teacher early on.”

The issue isn’t so simple, however, since teachers of color exhibit the same bias toward students of color as white teachers. The city allocated $23 million for anti-bias training in its 2019 budget, with the goal of reaching all public school educators by 2021.Go to website to listen.