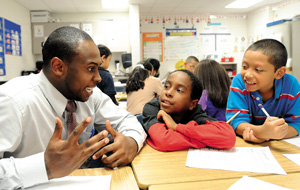 He’s a man, and he teaches elementary school.

Bell, a third-grade teacher at Nesbit Elementary, is one of about 250 male elementary classroom teachers in Gwinnett County Public Schools. That number excludes physical education teachers and those who teach specials such as art or music. In all, there about 400 men who teach elementary school.

Throughout GCPS, the largest school district in the state, women dominate the teaching profession. That’s not surprising, as education has historically been a woman’s profession. At every level in Gwinnett, the majority of teachers are women — and that’s especially true at the elementary level, where men comprise only 6.6 percent of the teaching force. At Gwinnett’s high schools, men account for nearly 36 percent of teachers.

The numbers aren’t that surprising to Bell. When he was in college in North Carolina studying elementary education, he remembers seeing only one or two men at schools. But that didn’t dissuade him from pursuing his career.

“I knew I wanted to work with elementary kids simply because I wanted to make a difference early on,” Bell said. “I love what I do, and I love the age group I work with.

“Not everyone gets to wake up and come to a career where they get to … make a profound difference.”

“Males can be nurturing,” said Bell, a married father of two toddlers. “These kids deserve to see men in an elementary setting, too.”

Calvine Rollins, the president of the Georgia Association of Educators, said she’d like to see more men teaching at the elementary level because she thinks they make good role models for students.

Many men are attracted to secondary education because they’re interested in coaching sports, fine arts positions such as band director, or administration, Rollins said.

Additionally, Rollins said women tend to be more nurturing, and men shy away from that role because they could be falsely accused of misbehavior.

“Elementary school students do need nurturing. Many do need their hugs every day,” she said. “Society tends to view that negatively coming from males.”

“If the salary was there and the support was in place for elementary teachers, we would see more males at that level,” Rollins said.

For Joe Wisniewski, a fourth-grade teacher at Knight Elementary, education is a second career. He knew he’d be among the few men in a school, because in his teacher education courses at Mercer University, he said he was “routinely the only guy in the class.”

At 6-feet-3-inches and 300 pounds, Wisniewski doesn’t look the part of an elementary teacher, but he has the temperament of one. He said his wife jokes that he has the patience of the Biblical character Job.

Wisniewski got into education by helping out at his son’s preschool after he left the business world. The principal told him he should consider teaching as a profession.

To be an elementary teacher, Wisniewski said he thinks it takes flexibility, humor, compassion and the desire to make a positive impact.

Beyond that, he said he gets the opportunity to be a male role model, something some of the children don’t have.

“Because of that, I wear a shirt and tie every day,” he said. “It’s not the dress code, but I do it because I think …. it’s good for these kids to see what professional dress looks like.”