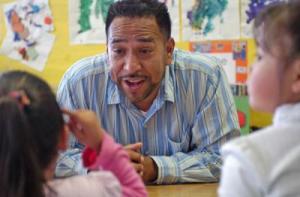 Mario Cornejo knows how to juggle.

He spends a recent afternoon wrapping a green paper sombrero together with tape for 4-year-old Anthony Moreno. He gently pulls aside Edy Solares to remind him how to handle scissors while walking.

He sings and dances to his ABC’s while two dozen preschoolers at William Anderson Elementary School in Lawndale follow along.

“Teacher Mario,” they call out and start to climb up the 9-year veteran’s broad shoulders to get his attention. He turns, flashes an easy smile, and tries to grant every wish.

But men like Cornejo are disappearing, especially in early education. He is among a dwindling number of male teachers in American classrooms – a number that has been declining for 40 years toward a historic low.

The National Education Association reports that men make up less than a quarter of the nation’s 3 million teachers. The U.S. Department of Labor reports that men made up only 2.7percent of 667,000 preschool and kindergarten teachers in the country in 2007.

In California, three in four teachers are women, according to the state Department of Education. The majority of South Bay school districts mirror the state numbers, with the exception of Centinela Valley Union High School District, which has a nearly equal distribution of both sexes in the classroom.

Pat Mendoza, director of Lawndale School District’s preschool program, said there are only two men among her staff of 35. She added that she’s grateful to have them.

“It’s extremely unusual” for a district to have two men in a preschool program, Mendoza said. “Most districts these days may have just one male or none.”

Sharon Russell, associate dean of the College of Education at California State University, Dominguez Hills, said the majority of the school’s graduate students are women preparing for work in elementary schools.

Men there generally gravitate toward administration positions like principals or specialized subjects at the high school level, she said.

Graduate students also tend to be older – the average age is 33 – with families. Because of this, men are hesitant to go into early education because there are fewer elementary school positions in the area.

“It makes our candidates pause and say, `In the four or five years it’s going to take me to get my credential, where am I going to find a secure job?”‘ she said.

“They are extremely impressionable at that time,” Russell said.

“They come up with these ideas that `girls can’t do this,’ and `boys can’t do that.’ And so if they have a male kindergarten teacher, that can dispel one of their stereotypes.”

Bryan Nelson, founder of MenTeach.org, which promotes the recruitment of male teachers, said the social stigma is one of the main hurdles male teachers face when considering a job teaching.

Nelson conducted a national study that reveals three reasons why men leave or avoid teaching: the idea that teaching is a “mothering occupation,” fear of being falsely accused of child abuse and, to a larger degree, the perception of low pay.

“Money is an issue but it’s not the only one,” Nelson said.

“It’s these three things working together that have men leave the field or don’t even enter the field.”

Taking care of his four children, ages 17, 15, 14 and 7, has been on the top of Cornejo’s list, and teaching hasn’t always been enough to pay the bills.

There have been times when he’s had to take jobs in construction and at a package-delivering company to make ends meet.

But Cornejo said he would never give up teaching for anything. For some of his students, he is the only positive male role model in their lives.

He eventually wants to go back to school and get a credential to become a physical education teacher but doesn’t know how he’ll find the time.

As the afternoon ends, a teenage girl picking up her baby sister after school spots Teacher Mario. The former student’s eyes widen as she rushes over to give him a great big bear hug.

“I love being with the kids,” he says later.

“They make me keep coming back.”