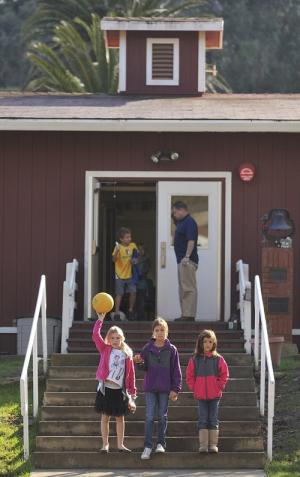 On a brisk Wednesday morning on Catalina Island, teacher David Morse starts the school day by raising the flag and ringing the brass bell.

First to appear are 10-year-old Malaya Barrios and her 7-year-old sister Aliah, riding their bicycles down a dirt road. The sisters park their bikes outside – there’s no need for bike locks – and head into the schoolhouse where they peel off muddy boots and wait for their four other classmates to arrive.

With its colorful posters, maps and books, the classroom looks like any other classroom in the Long Beach Unified School District. But on the outside, the little red schoolhouse, complete with a tower and bell, looks like a scene from “Little House on the Prairie.”

Nestled in the tiny unincorporated village of Two Harbors on an isthmus near the western end of Catalina, it is the only one-room schoolhouse in Los Angeles County and one of just a handful left in California.

“It’s entirely unique,” said LBUSD school board member Jon Meyer, who was principal when the schoolhouse opened in the fall of 1987. “Where else can you find a one-room schoolhouse that services kindergarten through fifth grade? It harkens back to the days of the Old West.”

Two Harbors, with a population of about 150, sits on an island 23 miles away from the urban sprawl of Long Beach. Its residents are a mixture of a handful of local business owners, workers with the nonprofit Catalina Island Co. and employees of the USC Wrigley Marine Science Center.

It’s a close-knit town where people know their neighbors and where the buffalo really do roam – sometimes right beside the classroom window.
A community effort

Before the schoolhouse opened, children in Two Harbors would take a boat, hike up a hill and then hop on a bus to attend school in Avalon, the only other population center and only real city on the island.

One day more than 30 years ago, a little girl fell off the boat and nearly drowned. Parents decided the trip was too dangerous for the youngest children and pushed to have an elementary school built in town.

Attendance has always been small, ranging from about two dozens students to just three in 2005. That year the school almost closed due to lack of funding, but parents and community members once again banded together and raised the money to keep it open.

“We had a lot of meetings and reached out to the community,” said Nehita Barrios, president of the school’s Parent Teacher Association. “There’s a great deal of people who care about this school and want to keep it open, especially people in the yachting community who come here year after year.”

Meyer said the school must have at least 12 students to be funded through the LBUSD, which oversees the schools on Catalina Island. If the number of students falls below 12, the local foundation will fund the empty slots, which average about $6,800 per student.

The foundation has managed to raise enough funds to keep the school open for the foreseeable future, Barrios added.

Today, the school has just six students – three first-graders, two third-graders and one fifth-grader. Older students who live in Two Harbors must take a 1″-hour bus ride into Avalon to attend middle and high school each day.

Barrios said her oldest daughter, who started sixth grade in Avalon this year, enjoyed her time at the little red schoolhouse and is adjusting well to the larger school environment.

Barrios, a third-generation Catalina native who works as a bus driver for the Catalina Island Co., said she couldn’t imagine living anywhere else.

“There’s no crime here, no traffic, our kids get to be kids,” she said. “Why would I leave?”

In the one-room schoolhouse, Morse is starting the day with an English lesson. He differentiates instruction by each grade and then breaks the students up into groups by grades to work independently.

“It allows the older kids to reinforce what they’ve learned and pulls the younger kids up more quickly,” he said.

Malaya said she doesn’t mind being the only fifth-grader because she can help other students.

Morse said Malaya not only assists the younger students, but also gets more one-on-one attention than in a regular-sized school.

“I think she understands that this is a special place and a very different way to learn,” he said. “She knows she doesn’t want that other way to happen before it has to, she doesn’t want to get lost in the vast sea of students moving from room to room.”

One problem for the school has been a high teacher turnover rate in recent years. Barrios said some teachers will begin to feel isolated and leave, or they’ll be displaced by the school district due to union seniority.

With more than 11 years of experience with the LBUSD, Morse, the school’s first male teacher, likely has enough seniority to stay. This is his first school year in Two Harbors, and the 47-year-old said it already feels like home.

“It might be difficult for some teachers, but I like the quiet and isolation,” said Morse, who also works in the summertime operating a hydrographic survey boat. “I think my family will say I’m a bit of a loner, and I don’t like traffic and crowds. I’ve always loved being around the ocean and seeing its many moods.”

It’s a big change from his previous job as a sixth-grade science teacher at DeMille Middle School, where he saw 220 students a day. He took time off to care for his terminally ill father when DeMille closed two years ago. When he came back to work, Morse saw an opening for a teaching job in Two Harbors and jumped at the chance.

“It’s an opportunity to teach kids that are really kids,” he said. “They haven’t been jaded by city life, and they’re very open-minded and very free in the way they react to learning.”

Morse’s wife and two children, a 9-year-old girl and 12-year-old boy, live in Morro Bay and were visiting the island over the holidays.

Morse said the community has been welcoming. Since it’s such a small town, students will frequently knock on his door with homework questions at all hours, and Morse says that’s just fine.

“The door is always open,” he said.

Barrios said the community is happy that they’ve found a teacher who loves the small-town atmosphere as much as they do.

“This is a special group of people that show a lot of respect for one another. This is Mayberry for real,” Morse said. “To me, it’s a little slice of heaven.”