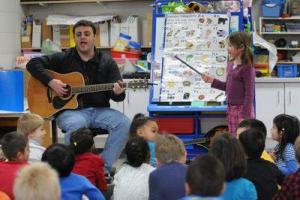 Rocco Marchionda is a bit of an oddity.

At a glance, his kindergarten classroom at Merrill Elementary School in Oshkosh looks like any other song-filled, activity-oriented room of 5- and 6-year olds.

The unusual part is Marchionda himself: He’s a man. Teaching kindergarten.

“Pretty much everyone I’ve ever worked with is female. I can’t imagine what it would be like to teach with another male,” he said.

The imbalance of men and women teachers, especially at the lower elementary grades, is well-documented and hasn’t changed much over the years, said Jean Inda, director of professional education programs in the University of Wisconsin-Oshkosh’s College of Education and Human Services.

But that doesn’t seem to bother local educators as long as the teacher does a good job.

“At the end of the day, the point is how the teaching is getting done and how the students are learning,” said Marchionda, who has been in the profession 13 years.

Three times as many women as men received teaching certification from UWO in the past three semesters, according to university graduation data. The gap is even wider at the elementary level, where only seven of 107 graduates certified to teach pre-kindergarten through sixth grade were men.

The mix of genders balances out at the high school level, where just under half of the certified graduates where men.

The imbalance isn’t unique to this area.

The reason for the imbalance likely has a lot to do with traditional gender roles in American society, Inda said.

“Part of it, I honestly think, is the caring and nurturing nature of that (elementary teacher) position. I think that (women) do have tendencies to be more willing to be the caretakers. We want to take care of the little ones, while the males don’t want to deal with that. They want to just teach the content,” Inda said.

But, every once in a while someone breaks the mold.

Crystal Ransom is one of three women among the 10 science teachers at Oshkosh North High School.

“It’s kind of a man’s game there,” she said, adding, “Most of the men in my family are scientists and most of the women are teachers, so it is sort of a clash of two worlds.”

Marchionda said he became a kindergarten teacher because “in no other grade have I seen children grow so much.”

While educators want better diversity in their schools, Inda said she doesn’t believe the imbalance is a problem.

“The most critical piece in a classroom teacher is not whether they’re male or female. It’s their ability to be a great teacher,” Inda said. “The worst thing we could do is encourage more males to go into elementary education if they’re not comfortable there.”