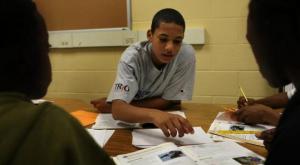 Men are such a rare sight on the Wheelock College campus that a visitor might believe that the tiny school, tucked among the hospitals and other small colleges in the Fenway, admits only women.

An admissions brochure features cheery testimonials such as: “Living in the dorms is so much fun. It’s like a sleepover every night,” from Christine. And, “It’s just one big family, and we are always happy to add friends [smiley face],” penned by Tanya. There is not a single missive from a John or a Jim.

Such appearances aside, Wheelock, founded in 1888 to train kindergarten teachers, went coeducational nearly 60 years ago, but male students make up less than 8 percent of its 800 undergraduates. How rare are they? Some don T-shirts proclaiming: “The Few, The Proud, The Brave: The Wheelock Men.”

Now, Wheelock is trying to boost its enrollment and its bottom line by making itself more attractive to this underrepresented group. One would think that it might have been easy to lure male students to a campus teeming with women, but Wheelock’s pursuit of the opposite sex is proving difficult when fewer men want to go into teaching, still the college’s specialty.

And so college officials, who hope to raise Wheelock’s undergraduate enrollment to 1,100 in the next four years and increase the male population to nearly 20 percent, are casting a wide net, admittedly resorting initially to stereotype.

First, it started men’s athletic teams two years ago. It plans to add soccer this fall and lacrosse next. It will offer new academic programs, including one focused on youth development based on sports. The school is redesigning its brochures to depict more men in classrooms and dorms. And it has begun training high school boys in Boston and New York City for the teaching profession, in hope of building a pipeline to a college with little name recognition, even in its hometown.

“It’s been challenging to recruit men to come here,” said Jackie Jenkins-Scott, Wheelock’s president. “Teaching is a noble profession, and it’s important for men to be engaged. . . . We want these young men to go to college and be successful. We want them to go into education. And it’d be wonderful if they came to Wheelock.”

Wheelock is joining this summer with an all-boys public school in New York, as well as several Boston high schools, in a leadership program to encourage teenage boys to consider becoming teachers in their communities. A bonus if they complete the two-year program: a partial scholarship to Wheelock, which costs $27,000 a year in tuition alone.

Most of the Boston boys, however, had never heard of Wheelock, nor do they necessarily want to be teachers, aiming instead for careers in business and law, subjects Wheelock does not offer.

But after spending their mornings as tutors in Boston’s summer school classrooms, some say they are drawn to certain aspects of teaching, such as being a role model for younger students. A few said they have been inspired to become guidance counselors.

“I want kids to know that I know where you’re coming from,” Marcelino Daveiga, a 15-year-old from Dorchester, said during an interview on the Wheelock campus. “I connect to you, and you don’t need to be afraid to open up to me.”

As for college, Daveiga said he is aiming for Columbia University, but has added Wheelock as an option.

Wheelock was able to sway Marvin Brow, who just graduated from the Eagle Academy for Young Men in the Bronx, to enroll this fall. The 17-year-old was an aspiring businessman and not interested in pursuing education as a career when Wheelock made a presentation at his school. But he was hooked after participating in a New York City tutoring program in which he helped a struggling first-grader get promoted.

“That’s when Wheelock reoccurred in my mind,” said Brow, who now wants to teach elementary school. “I want to be able to show kids that they can come out of situations where it seems like they’re bound to fail and turn into someone great.”

It doesn’t faze Brow that his Wheelock classmates will be mostly women. On the contrary, he said: “That’s a plus, coming from an all-boys school.”

Wheelock is banking on its expanded athletics program to help ramp up its recruitment of men in the short term. The male population has doubled, to 66, since men’s basketball and tennis teams were introduced two years ago. Sports has also enabled the college to recruit in regions of the country where athletics are paramount.

“In the South, you start talking about sports programs, and you’re going to open some ears,” said Adrian Haugabrook, hired as vice president for enrollment last year to boost enrollment and increase diversity on campus.

Elliot Hernandez, a basketball player from Florida, chose Wheelock over a large state university because he would get more playing time at the NCAA Division III school. Hernandez, who is double-majoring in social work as well as juvenile justice and youth advocacy, said he was also attracted to Wheelock’s focus on helping children and families.

At times, the 19-year-old sophomore said, it is intimidating to be the only man in class. But he says he has grown to appreciate the female perspective in and out of the classroom.

“Sometimes, you just want to chill with all your guys, and there’s not that many of them here,” said Hernandez, who lives with his teammates in a coed dormitory. “But by the end of the year, you really don’t see a big difference between girl or guy.”Read the comments and add your own.