on September 21st, 2022 Posted By BG in Articles
by Ava Kian - MinnPost 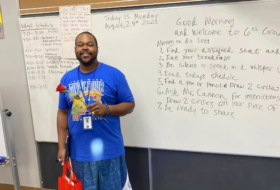 James Cannon remembers being the only Black kid in a class of white kids. Not only that, but of all of his K-12 teachers, he distinctly remembers the two Black teachers because there were so few.

It’s been proven that representation makes a difference in a child’s life. Studies looking at Black boys in the elementary grades showed that those with a Black male teacher were 29% less likely to drop out of school years later and 39% for very low-income Black students.

Following protests of the Minneapolis Public School district, there is now a district policy to go into effect next spring that exempts teachers from “underrepresented populations” from seniority rules during layoffs.

A Minneapolis property owner filed a lawsuit alleging that the policy protecting teachers of color from layoffs in the city’s school district discriminates against white teachers. The suit is backed by the national conservative interest group, Judicial Watch.

But there is a shortage of Black teachers in Minnesota compared to the school-age population of Black children. The Minneapolis and St. Paul public school systems serve approximately 70% students of color, while the teacher corps is only 17% of color, and other metro districts reflect similar numbers, according to Markus Flynn, the director of Black Men Teach, who wants to change that.
Box Top’s efforts to decrease the disparity

Box Tops for Education, a General Mills initiative, is giving $20,000 in donations to five teachers in Minnesota, which they can use towards student loan debt, or if they have less than that in loans, they can use it as a retention bonus.

“They (Box Tops for Education) had an interest in demonstrating their commitment to racial equity in the Twin Cities. I think they saw our organization as a group that had mutual interest, and they felt like they could help support us and the initiatives that we wanted to launch,” Flynn said.

Black Men Teach works with schools in the Twin Cities and some schools outside the metro to increase the number of Black male teaching staff in their schools. Right now, It has about 15 men in its high school fellowship and 30 men in the college fellowship. The goal is for the eight partner schools to have 20% of their teaching staff be Black men within six years.

Cannon is a sixth-grade teacher at Eisenhower Elementary School. He just recently finished his master’s program with the help of Black Men Teach.

He remembers being thought of as the “kid with behavior problems” by his teachers.

“Imagine being a, a little Black kid and a sea full of white kids and never getting called on when you have your hand raised, but getting caught every time you’re doing something wrong,” Cannon said. “I wasn’t the best-behaved kid, but that was a learned behavior because I was seeking that attention that some of my white peers were getting and I just wasn’t getting from my teachers.”

Having more Black teachers, specifically Black men, would have created an extra sense of understanding in the classroom and reduced the pervasiveness of what he later realized was racism, he said. To this day, there are various forms of racism at the school, Cannon said. He pointed to the Instagram page “Black at Breck School,” which highlights such incidents.

As a teacher, he aims to prevent that from happening to other students.

Eisenhower Elementary in the Hopkins School District is 73% students of color.
Black Men Teach at work

Cannon heard about the opportunity to get his master’s degree through Black Men Teach. It also gave him a scholarship every semester, which helped him pay for the program.

“That was a huge, huge, huge help in me being able to even think about doing the program,” Cannon said.

The financial assistance that Black Men Teach gives has led many to pursue teaching despite being a not very lucrative career.

“I don’t know if I would’ve even gotten into teaching if I didn’t know that there was some type of loan forgiveness through Black Men Teach,” Cannon said.

The program has three fellowships, a high school, college and teaching fellowship. The organization works with different schools to recruit Black men into the education pathway program, which offers college and high school credit to students.

The college fellowship focuses on financial support, and the teaching fellowship puts the men into different schools, notably schools with a culture and climate conducive to retaining Black teachers.

“The number one challenge that I have in my organization, it’s not raising money; it’s not finding men who want to be in elementary school, which most people would think it is. It’s actually, how do you find a school building that’s open and actually ready to bring these men in,” Flynn said. 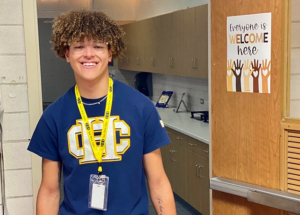 Keondre Lewis was in his junior year at Mankato State University when he heard about Black Men Teach. With the help of Flynn and the organization, Lewis became a student teacher at North Park School for Innovation in the Columbia Heights Public School District, leading him to where he is now. There, he is not the only one.

“(It) makes it so that you are not the only voice from that different background. If you’re the only Black male in a school of predominantly white women, that can be taxing on you mentally, being expected to speak from a Black perspective or being expected to speak from a male perspective,” he said. “That can be challenging and can cause some burnout.”

This September is Lewis’ first year teaching. He’s teaching second grade in the same district where he was once a student.

The lack of diverse teachers in Lewis’s classes growing up had a lasting impact on him.

“I looked back at my educational journey, growing up in a diverse community. I struggled and really didn’t see teachers that looked like me or my friends. That was a big part of why I went into education,” Lewis said.

Seeing teachers that look like you makes a big difference, both Lewis and Cannon feel. And there is data to back up the feeling.

“A lot of my Black boys have been super excited to be a part of school. During open house, one of my kids, who had never seen me before, walked in the room, and his parents and family were trailing. The first thing that I see from him is we make eye contact. He just goes, ‘yes,'” Lewis said.

Not only does it help youth be excited about school, but it also helps people build and strengthen their cultural identity.

“Students need to see people who look like them, especially early on,” Flynn said. “That’s why elementary is our focus and not the entire scope of K-12. Having those people early on who can help you build that love for learning or build an affinity for school and can support you and help you build a strong, positive racial identity is critically important, especially in a place like Minnesota where disparities are so pervasive.”