on April 25th, 2013 Posted By BG in Articles
by Kevin Hardy - TimesFreePress.com 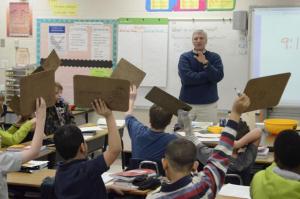 In the back corner, a wooden fort covered in camouflage netting provides a quiet haven for reading. The students — all boys — dress in camo shirts, athletic gear and gelled hair. In their writing assignments, they pen stories about bloody shark attacks. On the book shelves, Sports Illustrated for Kids sits inches away from Dr. Seuss.

While studying math, some sit quietly at their desks. But others stand up during lessons. Some even walk in place or sway back and forth while looking over their work.

And in this class, nicknamed “Band of Brothers,” that’s OK.

Hall’s room provides a special place for male students at Wallace A. Smith Elementary. And as one of only four male teachers at the 800-student school, he provides a unique take on teaching — a take that officials say the county needs more of.

Education has been a female-dominated field in the United States for decades. Now only about a quarter of the nation’s teachers are men, and they’re heavily concentrated in the upper grades.

Across Hamilton County, men comprise about 23 percent of the teaching ranks. But only 8 percent of teachers in the county’s 44 elementary schools are men.

Men historically have been drawn to teach in middle or high schools, where coaching opportunities abound and most teachers specialize in a single subject. Educators say societal gender roles, teacher salaries and attitudes about the nature of elementary school work have kept men out of the lower grades.

But advocates say elementary schools need more male teachers, who bring a different perspective to the job, may connect better with some children and can provide positive male figures in their lives.

“There are lots of things we can teach as mothers,” said Smith Elementary Principal Sharon Dodds. “But the one thing we can’t teach is how to be a man. And male teachers can.”

“The teaching profession should represent the broad experience and background of the population we serve,” said Ira Lit, associate professor at Stanford University’s School of Education.

After 20 years in banking, Hall went back to school to pursue an education degree. He wanted to give back, and he had always enjoyed young children. But he experienced firsthand how money can keep many people — men and women — out of the teaching ranks.

His income was slashed by more than half, so he had to take on side jobs to keep up with the bills.

“You have to do it because you want to do it,” Hall said. “And your family has to agree.”

“To this day, there is a negative perception about men, especially young single men, who want to work with young children,” said Elvis Sanchez, a Whitfield County, Ga., teacher who recently formed Male Elementary Teacher Advocacy, or META, to push for more men teaching in elementary schools.

He said he received many raised eyebrows and much cautionary advice from professors while studying elementary education. One hiring administrator even told him she wouldn’t have hired him had he not had a wife and kids.

“That is why there is a huge need for advocacy,” Sanchez said.

So part of the advocacy work is encouraging men to believe they can be effective at the job.

This isn’t a new or unknown issue for districts. But similar to the desire to hire more culturally and racially diverse faculties, there’s a sense that administrators can do only so much. The talent pool is only so big.

Officials would like to hire more men at the elementary school level, but few apply locally, said Robert Sharpe, Hamilton County’s assistant superintendent of education and leadership support. Sharpe said applicants who can teach reading, math and other subjects well always will move to the front of the line.

“That’s the thing we look for first,” he said. “But elementary principals are certainly eager to hire male teachers who are great at instruction.”

But Nelson thinks many men are interested in teaching.

Many make a midcareer switch to teaching, he said. Alternative teacher training programs often offer master’s degrees in education to participants. So many career changers actually cost more to hire than recent college graduates, because teacher pay is mostly based on years or experience and education levels.

“A lot of men do apply,” Nelson said. “They just don’t get interviewed.”

Districts need to be proactive in recruiting and hiring qualified male teachers, Nelson said. If the problem isn’t addressed, the gender gap can be self-perpetuating, he said.

“I think if you don’t have men there now,” Nelson said, “you aren’t going to have a picture that this is a place for me.”