on March 23rd, 2016 Posted By BG in Articles
by Fahima Haque - Washington Post 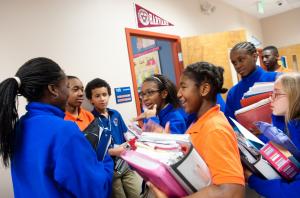 The statistics have almost become cliché: Black elementary and high school students score lower on standardized tests, on average, than their white or Asian counterparts. For years, educators have searched for solutions. For Kwame Griffith, a senior vice president at Teach For America, the way to help narrow this achievement gap is by recruiting more black and Hispanic male teachers.

Griffith, 32, said that seeing more black male teachers can inspire students in and outside the classroom.

“We need to set up our kids, our families, our communities — the most disaffected — and have them play a real role, as people of color, that they accept and embrace,” he said.

For years, Teach For America had difficulty attracting men of color to the teaching ranks. Griffith said he understands why: Many recent graduates of color are pressured by their families — after years of financial sacrifice — to enter lucrative fields. And recently, teachers increasingly have been fired and furloughed as state education budgets shrink, he said.

Recognizing this disparity, the Department of Education has launched an initiative to recruit 80,000 African American male teachers by 2015.

Griffith and Teach For America have also specifically worked to diversify their applicant pool to attract more black male teachers.

“We disproportionately use our resources to go out and build relationships with students of color to personalize the magnitude of this education problem,” he said.

Griffith said Teach For America is beginning to have some success. He said 10 percent of the senior class at all-male Morehouse College applied to Teach For America last year. At Howard University, it was eight percent of all seniors. Also, one in seven African American seniors from Ivy League schools applied this past year.

Teach For America received more than 48,000 applications for their 2012 corps and from that, more than 2,400 applicants identified themselves as black males, or roughly 5 percent.

Griffith accepts that there is more work to do than beyond what the statistics show, good or bad. But he envisions a bold future.