on November 24th, 2017 Posted By BG in Articles
Anonymous - Stuff.co.nz 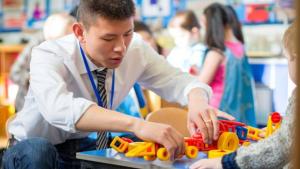 My day started like any other. I got up early and had breakfast. My girlfriend, who is now my wife, drove me to work.

It was a beautiful, sunny day at the daycare centre where I worked, and the children were running around outside burning off energy after weeks of terrible weather. Sunny days in winter are an early childhood educator’s holy grail.

I’d been working at the centre for six months, while I waited for the next intake to study early childhood. A centre is permitted to have a ratio of untrained and trained staff and I’d been hired on the condition I would become qualified and remain at the centre after I’d finished my studies.

Everything was extremely normal. I set up morning tea and supervised the children as they played. The morning went quickly and before I knew it, it was lunch time. My girlfriend asked me to meet up for lunch, which we did. She had been a little unwell the past week. We ate in the car and she gave me a few items wrapped up like a present – baby booties and other baby items. She was pregnant! I looked at the pink line, and even though we had only known each other for few months it felt right.

After a bit of talking and hugging I kissed her goodbye and went back to work with a pretty big grin on my face.

The afternoon was a mixture of nappy changes and wiping snotty noses. My employer had suggested I do all the same tasks as the female staff so everyone knew we did the same work and were of equal value, so I did. I wanted to show that, like women, men weren’t to be stereotyped. I was conscious of how important positive male role models are in the lives of children and wanted to make a real difference.

I was sitting on the floor with a few children, singing, when my boss asked me to come into her office. I thought she may have wanted to talk to me about my studies, as I’d recently been accepted to study early childhood.

As I entered the room, her expression was one of dread. She told me to sit down. The parents of a child had made a complaint against me. At the time I wasn’t allowed to know any of the details of the allegations, only that they were of a sexual nature.

My heart sank. I had never felt anything like this, could hardly talk, couldn’t breathe.

It came as a horrendous shock to me. As a male teacher I had known it was a possibility and I had heard how cases against men had lead to witch hunts and false accusations, even false imprisonment. But this was the 2000s and we were living in a new era of gender equality! I had dismissed the risk as low and pushed it to the back of my mind.

But the worst was yet to come. I had recently moved into my partner’s house but because she looked after children at her house as a job I had to move out, pending the police investigation.

Thankfully, my parents had room. At this point I had no idea what the allegations were and thoughts were spinning around in my head about how this could have happened. My boss had done everything possible to make it a safe space for men to work there. How could it have gone so wrong?

Every day, I would call my girlfriend. Finding out you’re having a baby just three months into a relationship is hard but we were being tested far beyond that. We talked about my visit to the lawyer. He told me matter-of-factly that cases like this can get out of hand very easily and that I should prepare myself to go to court.

My partner and I talked about the ‘what ifs’. What if it went to court? What would we do? What about our baby? We talked about coping under this amount of stress. My girlfriend mentioned abortion. I understood why but I still hit rock bottom.

Finally, it was time to be questioned by police and I was told the exact nature of the allegations. The parents of a young boy believed their son, who had begun to touch himself when his nappy was being changed, had been taught the behaviour by someone else. They questioned the child with leading questions to get him to single out two teachers – myself and a female teacher – but only I was suspended and questioned by police.

Knowing what I was up against, I was less worried but I wasn’t going to count my chickens. After about an hour of questioning, police came to the conclusion that there was no evidence to support the claims made by the child’s parents.

After this ordeal was over I tried to go back to work but after a month I couldn’t do it. Every time I looked at a parent I would break out in a cold sweat that would lead to a panic attack as I hid in the toilets, sobbing to myself. I decided to call it quits; my heart was broken and it was never going to heal in that environment. The hardest part was saying goodbye to all my friends, both staff and children, but I just couldn’t do it any more.

Today, things are slowly getting better. I have post-traumatic stress disorder and still have the occasional panic attack, especially when other people’s children say hello or try to talk to me. I even get them when dropping off and picking up my own kids from daycare or when taking them to singing and playgroups.

My innocence has been stripped away and I doubt it will ever truly come back.That day everyone did exactly what they should have been doing. A child was being a child and doing child things, parents were concerned and did something about it, and I was doing my job – a job I can no longer do.

This remains an extremely sensitive topic to talk about and at the time I was advised by the police and my lawyer that simply talking about it would be enough to create more hysteria and damage. The whole ordeal had to be shrouded in silence as it is often deemed too unsafe for men to openly talk about such experiences. This happens more often than anyone would care to know. False allegations are often swallowed up in the sea of claims that fail to get an arrest.

It is often stated that men choose not to go into ECE because it is perceived as women’s work. Yes, this can be one reason but to assume that it is the only deciding factor is disingenuous and dangerously naive. We are a long way from creating a safe and fair work place for men who work around children. Society is constantly branding all men by the actions of the few who do wrong. That kind of attitude comes at a cost and is hurting your grandfathers, your fathers, your brothers, and – most of all – your sons.