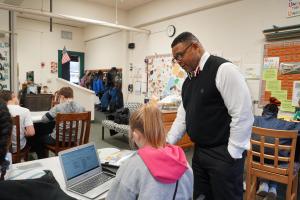 He met the first one, a physical education teacher, in grade school — and then another, a physiology teacher, in high school. At college, he only had one black male professor.

Today, Diggs, 37, finds himself in a similar position. An assistant principal in Manchester at Parkway South High School  for eight years, he’s the only black administrator in his district.

“I didn’t really realize it until I was invited to go speak to some elementary school kids, and it dawned on me that these young kids would not have a person of color — specifically a male person of color — to be their teacher, even after they have graduated through their normal track from elementary, middle to high school,” Diggs said.

Over the course of 13 years in the field, Diggs said he noticed that some students will reach high school without ever being exposed to a teacher of color. According to the U.S. Department of Education, out of about 3 million educators, minority teachers amount to just 20%, and, of that number, black male teachers only represent 2% of all educators.

Diggs said being the sole African American male in the classroom or the school can cause the educator to code switch — in his words, to “conform and mold into what the majority is, and then you tend to slide away from your authentic self.”

BMESTL is a platform where educators of color, particularly black men, can connect, find mentorship and advocate for more black voices in the classrooms.

The many challenges of being one of the few African American educators in the field sparked the idea.

Last spring, Diggs was monitoring the cafeteria during his lunch duty when a student came up to him and showed him an Instagram post of himself with the racist slur n—a written across the top of the photo. The post garnered hundreds of likes and a handful of equally racist comments to accompany the picture.

After this, Diggs felt unsafe and wanted to leave education altogether.

“For the rest of that school year, it was a very uncomfortable place to be,” he said.

Although the racial post was created last spring, it resurfaced in early February and circulated around the high school again. This time, he said, he feels empowered because of the support he has from his brothers within BMESTL.

Through the group, Fields and Diggs want black male educators to know that there is a way to get help decompressing, so they will not have the urge to leave the field.

Fields, 35, said he wants BMESTL to be an organization that connects black males for two reasons: self-care and upliftment, because he wants men to have a safe space to address certain traumas they are experiencing at work.

While chatting with men during their frequent meetups, Fields observed that being the only African American male educator in the classroom or school is the men’s No. 1 concern.

Steger Sixth Grade Center social studies teacher Tracey Mack said if there were more black men in classrooms, more students of all races would have the opportunity to connect with them as role models and educators.

“Every student needs to be exposed to diversity,” Mack said. “That’s where we start to break that mold — that the idea of the white person is in authority because that’s what they see on a regular basis. And when you have the black male in that space, [black children] start to see that’s something I can do. Like, I don’t have to be an entertainer or an athlete to make a difference in somebody’s life, I can be like my teacher.”

Where there are black male teachers and administrators, they may be subject to stigmas and stereotypes,  Mack said.

For example, either the students label them as disciplinarians or only exchange conversations with them in the gym for PE or after-school athletics.

Whether or not students at Steger Sixth Grade Center or Dr. Henry Givens Jr. Elementary School participate in Duane Hawthorne’s health or physical education class, he said, just being in the building allows him to dispel negative perceptions about African American male teachers.

Hawthorne said generally people place PE and health instructors in the same categories as the custodial staff or the cafeteria crew.

“There’s certain things that you have to go through in order to be in this position. We earn a certificate — no different than your math teachers and science teachers,” he said.

Hawthorne is a former NFL player, and some of his students look to him to teach them about football, but he said he teaches all sports to expose children — especially those of color — to sports that may have never been on their radar, like hockey or pickleball.

Because African American male teachers are so few, Hawthorne said he has seen varying levels of respect from students. He believes no matter what position a black person in education carries, their very presence can benefit both black and white children.

“At some point in time, these kids are going to grow up, and they may have a boss that looks like me. And if they can listen to me now in elementary and middle school, [then] they are more inclined to listen to their boss that looks like me in their adult life. [But] a lot of times it doesn’t happen, so you get individuals that choose not to listen or follow directions because of your skin color,” Hawthorne said.

Fields said the work of BMESTL will help empower men through situations where they may feel disrespected or isolated. Throughout the year, the group arranges a variety of activities for black educators to engage in, such as card games, mentoring sessions and, most recently, a symposium about the state of the black educator.

About a thousand educators from across the nation attended the seminar at Touhill Performing Arts Center. African American administrators from throughout the region spoke about mental wellness, anti-racism, hiring and training and diversity and inclusion. There were also regional human resources officials accepting resumes for open educator positions, which is another heavy topic that the group discusses frequently.

Diggs said most black male educators feel like they need a special formula to even get to the interview table. And if they are interviewed, they are often unable to advance because the next steps are so layered.

During a period of time when Hawthorne, the health and PE instructor, was applying for teacher positions, he said he was interviewed five times for a single job. He did not get the position and felt the number of interviews was excessive.

Hiring people of color to expose children to a broader education is ultimately what administrators like Art McCoy, Jennings School District superintendent, said his district is working toward. He believes that school districts can start filling in the gaps with African American male teachers just by looking at their surrounding communities.

BMESTL is building a framework for educators. Fields said the intention of the group is to expand and change the landscape of education through diversifying the ranks with not only black males but every male minority group.

“I think organizations have to put themselves in a position where although we want to diversify our staff, you also have to understand that the true essence of what we’re trying to get to is inclusivity,” Fields said. “When you bring in a diverse staff, you want their voices permeated throughout the decision-making. Because if you are focused so heavily on diversity and you’re not allowing folks to be their authentic self, especially in a decision-making process, then the only thing you’re going to really do is have a surface-level depiction of true equity.”

In St. Louis, Edhub STL is also working to provide true equity in education for the region. Throughout the year, the self-described “physical and intellectual space” devotes seminars, fellowship opportunities and programming to a wide range of educators.

The group wants to bridge education with the public sector.

At the end of January, Edhub STL held a seminar about educational freedom, where children from around the region used their agency to depict what an equal education opportunity looks like to them. Educators were also able to openly discuss ways to becoming an anti-racist and anti-bias educator and how to be an abolitionist teacher.

“If we look at outcomes for students with targeted identities, in any system in St. Louis City or County, we see that there are significant inequities present,” Sherita Love, EdHub STL director said. “Given this, the work is for all of us to grapple with how we got here, interrogate the systems that keep inequities in place and to reimagine what education equity looks like so that all students are thriving, no matter what backgrounds they come from.”

As for Fields and Diggs, imagining what a fair education in St. Louis looks like can be difficult, but through the advocacy work of their group, BMESTL, they believe it is achievable.

“I’m looking forward to voices being unlocked, capacity being built and the region being galvanized,” Fields said.

Andrea Y. Henderson is part of the public-radio collaborative Sharing America, covering the intersection of race, identity and culture. This initiative, funded by the Corporation for Public Broadcasting, includes reporters in Hartford, St. Louis, Kansas City and Portland, Oregon. Follow Andrea on Twitter at @drebjournalist.