on April 8th, 2012 Posted By BG in Articles
by Allen Huntspon and George Howell - CNN 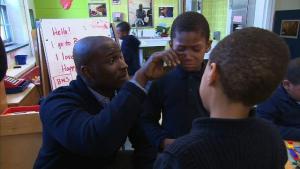 Take a moment and think of all the teachers you had between pre-K and twelfth grade.

Now, how many of them were black men?

For most people, this question won’t take too long to answer. That’s because less than two percent of America’s teachers are black men, according to the Department of Education.

Terris King, 25, a kindergarten teacher at the Bishop John T. Walker School in Washington D.C., believes that for African-American children, having a strong role model in front of them can make a huge difference.

“I fit a void in their lives,” King says, “A lot of them have never felt what it feels like to shake a man’s hand, [have him] look them in the eye, and tell them right from wrong. They need those things. They need someone in their lives who’s strong—they need an African American male in their lives that’s positive.”

This year, King has just over fifty African-American children from low-income households in his classes.

“I look out of my window, and I see gentlemen that are standing on the corner, and I look at my boys, and I can say to myself what I’m going to teach in a day about what’s right and what’s wrong, might turn the path a little bit.”

It’s this kind of impact that Education Secretary Arne Duncan says he is trying to replicate in classrooms around the country. He launched the Teach campaign and is actively trying to recruit more African-American men to go into teaching straight out of college.

“I think all of our students benefit from having a black male in the classroom,” Duncan says, “But particularly our young black males. I think what we haven’t talked about enough is that we’re competing with the gangs, we’re competing with the drug dealers on the corner, and when students fall through the cracks, when young people don’t have that positive mentor, in a school setting, in the church or community, there’s always a guy on the street corner that can say come my way.”

But if you ask most African-American men why they don’t teach, they’ll tell you—-it just doesn’t pay the bills. King says, “Historically in our society there is an expectation that a man provides for their family. This is an added pressure, that warns against men becoming teachers because of the salary.”

“I just want our teaching workforce to reflect the tremendous diversity of our nation’s young people. [But] I think fundamentally we have done a poor job as a country, historically, of making the teaching profession attractive,” Duncan says.

The newly launched RESPECT Project is one way the Department of Education is trying to do just that. By offering incentives to teachers and school districts that will increase starting salaries and provide more professional development and training among other things, Secretary Duncan hopes to eliminate barriers and concerns that may keep qualified candidates away.

“There are African American men all over the country with skills, and with passion, that can serve these boys in so many capacities that they don’t even know,” King says. “It makes a huge difference because [the students] are able to be comfortable with themselves, they’re able to see what they’ll become one day, and if those images are positive, it raises their self identity to another level.”

King hopes that by reaching his young black boys early, he’ll be able to help them build a strong educational foundation that will allow them to buck another troubling trend: the low number of African American males entering and graduating from college. A recent report from the Department of Education showed that males are now a distinct minority on campus–even at historically black colleges and universities.

“Its an honor for me to be here with them. I feel like I’m a part of a revolution in a sense because we get to see the future leaders of tomorrow starting right here. I think at Bishop Walker School, we really believe in our boys and we really believe that they can be anything that they want to be.”