on September 15th, 2022 Posted By BG in Articles
By TaRhonda Thomas - ABC Philadelphia 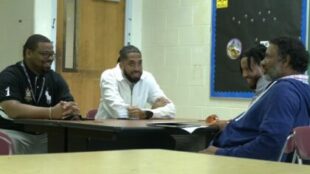 “I can just be myself and teach,” he said of the job he loves.

Butler is among the only 2% of teachers who are Black men. He and three other Black male teachers made a conscious decision to join forces at MLK High School.

“When kids come to every room, they see a Black male in front of them. I mean, imagine the impact,” said Michael Flemming.

“About 75% of our students are Black males,” said MLK High School Principal Keisha Wilkins. “Kids may have gone eight years without having an African American teacher or just someone who looks like them.”

“I feel like this year, kids will see things are a little different. Things are changing. The whole world is changing,” said Denzil Flemming.

Studies show that just having a Black teacher could decrease a Black child’s chance of dropping out by up to 39%. That’s why the men joined forces. All of them were already teaching. Some came from other professions like Denzil Flemming who was an engineer before becoming a teacher.

“We said let’s do it. Let’s all come together at a school and make an impact,” said Michael Flemming.

They decided to be coworkers since Michael Flemming, Butler and Chism were already friends.

The three of them graduated from Philadelphia public schools.

They don’t rely on disciplinary write-ups for students as much as they rely on relationships.

“Not everything is a suspension,” Michael Flemming said.

“We try to connect more on a relationship type of thing. We can be a father figure, we can be a mentor,” said Chism.

As they join forces, they also have a little fun.

“We call ourselves the frat house,” Chism laughed.

They hope that by being present for their students both in and out of the classroom they can give the MLK freshmen a brighter future.

“In four, five years, they’ll come back and say, ‘Mr. Flemming, Mr. Chism, look I’m in college,'” said Michael Flemming. “That’s what I want to see for our children.”