on June 6th, 2017 Posted By BG in Articles
by Dale Mezzacappa - The Notebook 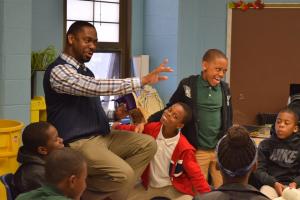 Stephen Flemming is one teacher in one classroom, but he may be doing as much to keep his low-income black students in school – black males in particular – as any formal program targeted toward “at-risk” students.

Flemming teaches English language arts to 5th graders at John B. Kelly Elementary School in Germantown. All but three of his students, spread over three homerooms, are African American.

Of the District’s teachers, just 4 percent are African American males, like Flemming, and he’s one of a mere handful at the elementary level.

In his spacious classroom, some of the students, especially the boys, are so eager to participate that they can hardly stay in their seats. One boy grasps a basketball and occasionally bounces it. Flemming doesn’t tell him to put it away.

Arrayed in a circle, they are discussing a book featuring a bullied high school student, learning on this Tuesday morning about how to spot bias in writing and the use of metaphor. Flemming, in his 10th year at Kelly, darts up and down inside the circle, coaxing out answers, prodding for more, lavishing praise, and all the while conveying an infectious enthusiasm about what they are reading and about school itself. He knows how to keep the discussion at a high level and also how to rein it in.

After the lesson, 11-year-old Jordan Smith marches up to a reporter and starts answering questions before they are asked.

“If you’ve got a problem, he’ll talk to you,” Jordan says of Flemming. “Seeing a black man teaching us actually changes our lives. We can be believing that we can be anything we want.”

Instantly, there is a crowd of boys, all echoing the same thought.

In March, Johns Hopkins University economists released a study showing that low-income black students randomly assigned to at least one black teacher are more likely to graduate from high school and aspire to college. The researchers tracked through high school all 100,000 students who entered 3rd grade in North Carolina between 2001 and 2005. The results were especially profound in the early years: Having just one black teacher during grades 3-5 increases “persistently low-income” black boys’ interest in pursuing college by 29 percent and decreases their chance of dropping out of high school by 39 percent. For black girls, the effects were smaller, but still significant, regarding college aspirations.

The “striking” results, the researchers said, are evidence that “stubbornly persistent attainment gaps are not impervious to policy changes” that would result in having more black teachers in America’s classrooms. Such a campaign by universities and school districts could significantly improve the life chances of African American students, especially boys.

“We’ve known this,” said Vincent Cobb, a co-founder with Mastery-Shoemaker principal Sharif El-Mekki of the Fellowship of Black Male Educators. The group’s goal is to bring 1,000 more black male teachers to Philadelphia by 2025.

“We’ve been having this conversation,” Cobb said. “We know that the earlier we’re involved, the bigger the impact we can have to build their confidence and change the trajectory for the rest of their lives.”

Yet the trends in Philadelphia, in Pennsylvania, and nationwide, are the opposite.

In the District, black teachers are dwindling as a percentage of the whole – once more than a third, black teachers now make up less than a quarter of the total. And the number of Black males is less than 5 percent, or fewer than 400 among 8,000 teachers. (Data for charter schools are not easily obtainable.)

Over the last three years, the number of black male teachers in the District has inched down from 396 to 379, even though the number hired for this school year, 76, tripled the total hired in the year before.

That is more than twice the national average of 2 percent, but still very low for a district in which half the students are African American.

Overall, the number of education majors has gone down by 55 percent, but for African Americans, it has decreased by 60 percent. For black females, the decline is 39 percent; for males, 64 percent.

“If you look at the national data, there are now more African American majors in STEM and business,” said Del Pilar. “There’s a shift away from education in general.”

A lot of that is due to a negative perception of the teaching profession, he said – low salaries, high stress, demands to increase test scores, and erosion of teacher autonomy. Requirements that teacher education candidates pass skills tests to enter the field are also deterrents for people of color, he said, due to the cost and to lower rates of passing.

Pennsylvania is looking at “promising models,” said Del Pilar, to better prepare teachers and attract a more diverse pool, including teacher residency programs that place prospective teachers in classrooms for a year instead of a few weeks. Del Pilar also touts movements such as the Fellowship of Black Male Educators, whose May convening he attended.

“That type of grassroots initiative can do as much as we can do on a state level,” Del Pilar said. “We think they can have an impact in production of diverse educators.”

Superintendent William Hite has also attended several meetings of the Fellowship and considers it an important resource. Philadelphia is actively working to attract more black male teachers, including a recruitment campaign at historically black colleges and a teacher residency program that puts a priority on diversity.

“We believe that our teachers should reflect the population they serve and serve as role models for all of our children,” Hite said. “Students across Philadelphia will have a better educational experience as we continue to diversify our teaching population.”

“While Philadelphia has more teachers of color than the nationwide average, we still have more work to do.”

Lincoln University, which historically, along with Cheyney and Temple, funneled the biggest contingents of teachers to Philadelphia schools, recently stopped offering its undergraduate education major due to dwindling enrollment.

“This is a civil rights issue,” El-Mekki said. “It’s not just good for black children. … All students can benefit from seeing black males in positions of nurturing and power.”

The problem goes beyond recruitment, though, to retention, said Richard Ingersoll, a professor at the University of Pennsylvania who studies the teaching profession.

“It’s like a bucket with a leaky bottom,” Ingersoll said.

Cobb, however, says he is in for the long haul.

A native of Syracuse, N.Y., the son of a college professor, he studied pre-med at Syracuse University with every intention of becoming an obstetrician. Then he worked one summer as a camp counselor in Upward Bound, supervising a group of 45 black and Latino boys in a residential college prep program.

“It was early mornings and late nights,” he said. “I remember being fatigued and thinking, ‘why did I decide to do this?'”

Then at the closing banquet, the 45 boys presented a book to him.

“Each one had written an essay on how I had changed their lives,” he said. “I didn’t know they would do that.”

First, he locked himself in the bathroom and cried. Then he called his parents and told them he wasn’t becoming an obstetrician, but a teacher. He changed all his courses, switched his major to political science, and got a master’s degree in education.

Cobb started out teaching 4th grade in Syracuse, went to work for a college access program, and then became an administrator with Teach for America in Philadelphia. Later, he moved to Mastery.

Schools, he said, “often do not allow black boys to be who they are. They can feel isolated, feel school is not for me.” Even he, someone whose parents were highly educated professionals, sometimes felt that way growing up.

Black educators, he said, are more likely to see acting-out behavior as communicating that “I’m trying to find my place in the space.” If teachers can make connections, “it inspires students to want to be and do more, if for no other reason to make that teacher proud: I like you because you understand me. That’s why zero tolerance will never work, that kind of thinking that will always feed the school-to-prison pipeline, black boys will never feel good enough.”

The black male educators interviewed also made it clear that it is possible for African American teachers to lack skills, empathy, and high expectations, while white teachers are often also mentors and inspirations.

“It’s not just being a black educator that makes a difference. It’s about being a strong presence who personally invests in student growth,” said Tysean Gross, a graduate of Martin Luther King High School and a former English teacher who now is the climate manager at Houston Elementary School in Mount Airy. “Often that is a black teacher, but not always.”

Gross said that at King, a white male teacher got him into a lot of special programs, another White teacher mentored him, and “my model for being an English teacher was a Filipino woman, who was no joke.”

Flemming grew up in West Philadelphia, attended Masterman and Bodine High School, where he encountered only a few black male teachers: two in music and one in science.

Still, he said, “I’ve always wanted to teach, since I was in kindergarten and 1st grade.” He got his bachelor’s degree in education from Temple, a master’s degree from Cabrini College, and is now pursuing a doctoral degree at Drexel University.

Spending time in his classroom is like watching the Hopkins study come to life.

In the front is a rack holding biographies of African American figures, from Coretta Scott King and Oprah to Frederick Douglass and Colin Powell.

In teaching The Bully, by Paul Langan, part of a popular series set in a fictional urban school called Bluford High, Flemming is departing from the official District curriculum. But he has been using it for years.

The book “speaks to” his students, he explained. The protagonist, a teen named Darrell, has just moved from Philadelphia to California. Miserable, he is the target of a bully in his new school. He has no friends. Then one day, a female classmate talks to him. “We freshmen,” she begins.

“He held on to those words like a drowning man holds onto a rope,” the author writes.

“What does he mean by that?” Flemming asks.

Raheem Fields’ hand is up. It’s a metaphor. Raheem says it means that Darrell knows he is not alone. “Everyone wants to belong to something.”

Flemming keeps pushing. “What are his classmate’s words giving him? Think about it.”

“It gives him hope,” a girl quietly answers.

Flemming points at her. “Nicely done.”

But Jordan Smith has a further idea he wants to share. Maybe Darrell has had an experience close to drowning. Maybe it’s like a flashback when he literally had to grab a lifeline. “He might really feel like he’s drowning,” Jordan says.

Flemming is well aware that so many of his students are familiar with trauma. He goes with it.

Jordan later leads the group of boys who gather to talk about their teacher.

“He tells us black people can be doctors and lawyers like white people,” says Adbul Bey. “He tells us about our race, how good black people are. He makes us read black history. He wants us to be on an exemplary level.”

Tymir Vickers said, “Mr. F. inspired me not to worry about my color, and he inspires me to say we can be anything we want to be.”

“He lets us do speeches,” said Kahlil Johnson. “He tells us if you want to be rich and famous and get a good job, you have to work hard.”

Raheem thinks he may want to be a teacher like Flemming.

“He teaches us at a high level. He gives us 6th-grade work!” Raheem exclaims. “I like when Mr. Flemming says the motto with us, ‘Failure is not an option, success is the only option.’

He inspires us to do more.”

Flemming is modest. “I can bring a different experience,” he said, “Not a superior one, but a different one.”