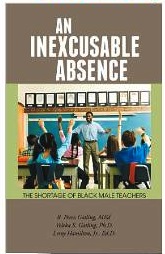 former Suffolk school principal and her husband have co-authored a book, along with another colleague, about the shortage of black male teachers in America.

Dr. Veleka Gatling, who was principal at Elephant’s Fork Elementary School for five years before leaving in 2012 and now works in Virginia Beach Public Schools, and her husband Perez Gatling, an assistant principal at Lynnhaven Middle School in Virginia Beach, co-authored the book along with another colleague, Dr. Leroy Hamilton Jr.

Titled “An Inexcusable Absence: The Shortage of Black Male Teachers,” the book is available on Amazon.com for e-readers and in print form.

“Really, the book is about diversity,” Perez Gatling said. “Every kid between the ages of 5 and 18 is required to be in school. All races, all nationalities. The people who teach them should reflect the diversity of the population.”

Widely reported statistics say the nationwide percentage of black male teachers is 2 percent. Perez Gatling said the absence perpetuates itself — if black boys don’t see black male teachers, they are less likely to consider it a career option — and leads to misconceptions.

“Children are so impressionable,” Gatling said. “Kids will remember things. How do the stereotypes get broken?”

Veleka Gatling noted that those black males who are in schools are far more likely to be custodial or cafeteria workers than teachers.

Speculation about the cause of the shortage is futile, and the best way to resolve it is up for debate. Veleka Gatling said colleges and universities should make more efforts to steer black males toward professions where they are under-represented, including education.

Perez Gatling said he started laying the groundwork for writing the book about six years, but began writing in earnest about two years ago.