on June 21st, 2017 Posted By BG in Articles
by Yawu Miller - The Bay State Banner 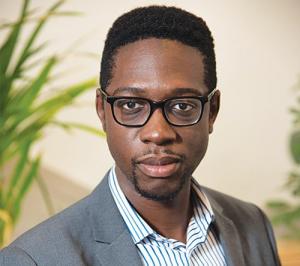 Travis Bristol is an assistant professor in English education at the Boston University School of Education who researches district- and school-based practices that support teachers of color; national, state and local education policies that enable and constrain the workplace experiences and retention for teachers of color; the intersection of race and gender in schools.

Bristol’s study on black male teachers has been highlighted in NPR, the Washington Post, Education Week, NBC News, and Fox News. Here he speaks with the Banner about the paucity of people of color entering and remaining in the teaching profession and strategies districts and schools use to attract and retain them.

Why are school districts around the country struggling to build or maintain diverse teaching staff?

Travis Bristol: It’s a multi-pronged reason. The first part, is the supply issue. Students of color are not persisting through or graduating high school like their white peers. Because they don’t graduate, they can’t become teachers. Their schools are under-resourced. Their teachers don’t have the resources or the training to get them through. That’s one issue. The second is that when people of color have graduate degrees, the system has not done a good enough job to make teaching attractive. There isn’t a robust “become-a-teacher” campaign like there is with the army. There’s no call to arms. There’s a messaging problem that we need to fix.

In some places nationally, teachers aren’t compensated as they should be. They shouldn’t have to live paycheck to paycheck. There’s also another issue where educators are predominantly white. The people who are making decisions around admitting educators of color may well be biased in what they see as the teachers they want to hire.

It is also true that in some programs where you have to take teacher licensure exams, those tests have historically have been biased and only came about after desegregation, when black teachers tried to work in white schools. There are multiple reasons at each stage of the pipeline.

In Boston, we see teachers of color over-represented in some of the most challenging schools, schools with high concentrations of special education and English language learner students. Many of those schools are ranked low in the district. What affect might that have on retention of teachers of color?

There’s this idea that just having teachers of color working with students of color will improve learning. That’s not necessarily the case, because teachers of color want the same thing as white teachers. They want to have the resources and time to plan and the flexibility to innovate.

Have there been any studies on that?

TB: I did see a recent study on bias in teacher hiring. And we also know that racial bias happens everywhere. We know that a white man with a criminal record has a higher chance of getting hired than a black man with a college education. Racial bias is in this country’s DNA. That will continue to manifest itself.

What kinds of strategies have districts used to better retain teachers of color?

TB: People have put into place programs like Boston Male Educators of Color. Those types of supports help teachers persist and make it through the day. I’m less certain that those programs make people want to stay year-to-year. They help teachers with their work, but they don’t necessarily begin to change the conditions in the schools where the teachers teach. So, unless districts begin to think about, how do you help principals work with teachers to improve their practice, how do you make sure teachers have time to plan, how do you give teachers and other adults tools to address students’ social and emotional challenges? — Until you begin to address those things, these special initiatives are good, they’ll get people through the day, but they won’t necessarily help people stay year-to-year. That’s the next work.

The unit of change can’t only be teachers of color. It has to be principals who have support from the district to improve teaching and learning in their schools. It has to be comprehensive.

Are there any school systems that stand out as examples of best practices?

Some states are now allowing teachers to be certified through non-accredited programs, like those set up by charter school operators in New Jersey. Do those programs show any promise of increasing the numbers of people of color entering the teaching field?

TB: Those programs are successful in attracting candidates primarily because of cost. If you are a 20-year-old, you have college debt, you’re looking to take on loans or apply to a program that’s free. Any reasonable person is going to choose a program that’s low cost like Relay [Graduate School of Education] or Teach for America. Once people get there, they realize there are real differences between these programs and traditional teacher education programs. One reason why these programs work is because they are low-cost. I work at a traditional teacher preparation program. It is troubling that people will have to pay $62,000 to do work that can change the world. Any reasonable person would say, I would rather not take on that debt.

Is there a downside to these programs?

TB: I actually gave a talk at Relay two weeks ago. As I said at Relay, I pause when I think about, if the goal is to give teachers who are going to teach in the most challenging schools less of an opportunity to learn how to teach, we may well be setting the very people who want to teach in those schools up for failure if we don’t give them sustained opportunities to learn how to teach.

Teach for America has launched a program for people in their junior year of college. I think that’s a much more positive model. But I should say that what I have been impressed by in alternative certification programs is that many are now talking about issues of race and equity that other traditional programs have ignored.

What are some encouraging developments in districts’ efforts to attract and retain teachers of color?

TB: We really don’t have a national articulated research agenda around recruiting and retaining teachers of color. One of the things I’m really hopeful about is that at the American Educational Research Association last week I got a group of researchers around the room to spend some time thinking about what it means to develop a research agenda around recruitment and retention of teachers of color.

So while we know something, and people are doing this research in silos, we don’t have a clear sense about attacking this problem. Many states have taken up this charge. I will be working with several states over the coming months to help them craft their commitments and agendas to recruit, support and retain teachers of color.

Is Massachusetts one of those states?