on November 30th, 2009 Posted By BG in Articles
by Wallace McKelvey - Staff Writer 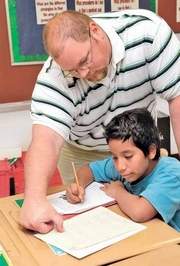 Four years ago, Principal Duncan Smith noticed a sizable percentage of the male students at Frankford Elementary School were having discipline problems.

The boys who were continually sent to his office shared one characteristic, he said. They were often from “broken homes” with no male role model.

Now, with six male faculty members and a mentoring program dedicated to teaching life skills to boys on the cusp of puberty, Smith said much of the destructive behavior that plagued his students has disappeared.

“A lot of important lessons — like taking responsibility or showing respect to women — means something more coming from a man,” he said.

Once a rarity, male teachers now represent more than a fifth of all teachers at the Indian River School District. As of 2008, spokesman David Maull said 132 of 615 teachers were male.

According to statistics from the Department of Health and Human Services, 730 divorces were filed in Sussex County in 2006. While the divorce rate has remained consistent since 2000, school administrators said the increase in male teachers provides some children with a much-needed father figure.

“This area has a lot of young men and women with no father, or no good father figure, to come home to,” said intervention specialist Anthony Cannon, who’s in charge of the school’s Gentleman’s Club. “I believe as a man, if you don’t respect yourself, you will never earn the respect of anyone else.”

The first thing he teaches students is respect. At each weekly meeting, he talks to fifth-grade boys about self-control, self-esteem and self-image. These lessons range from how to defuse a conflict to how to tie a necktie.

“A lot of them go through things at home and lash out here without thinking,” he said.

But his job is to help students before they get into trouble and help them make the transition into middle school.

“If a boy, especially in the fifth grade, is coming in with body odor, a teacher can call him in to speak to the class about deodorant,” he said.

With sensitive issues, such as hygiene, he said male students are more likely to respond to a man than a woman.

While Grise does recognize his minority status in the school, he said the gender divide between teachers is not that profound.

“The guys talk football in the morning, but we’ll still chit-chat with the ladies,” he said.

Cannon said he’s there to take up for his female colleagues’ husbands.

Clayton Riepem, who started working as a music teacher this fall, said the district has been welcoming to male teachers.

“There’s definitely few of us, but we’re never made to feel that way,” he said.

He focuses on his work and sharing his love of music with his students.

“I want to make them feel the same intense excitement, the way I felt when I was 10 years old,” he said.

Cannon and Grise said the majority of students they teach come from families in which one of the parents, usually the father, does not live in the home. Their roles in the elementary school often serve to fill that gap, providing both instruction and mentoring to their students.

“I hope being a role model might break the mold they’ve been in,” said Grise, who has two children of his own. “Maybe I can show them what a father does.”