on July 22nd, 2010 Posted By BG in Articles
by Angela Reed - Shields Gazette 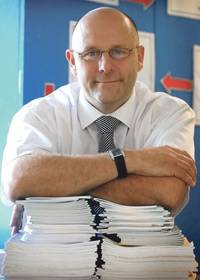 Tyneside is bucking the trend when it comes to the number of male primary school teachers – but they still make up just over a quarter of the workforce.

Just 15 per cent of teaching staff in primary schools are male, according to the Training and Development Agency for Schools (TDA).

But figures from South Tyneside Council show that the 1,525 teaching staff in primary schools in the borough, 73 per cent are women and 27 per cent are men.

The TDA said there has been a 20 per cent rise in applications from men over the last five years.

But of the 21 newly-qualified teachers recruited in the borough this September, only 20 per cent were men.

A TDA poll found more than four in 10 adults believe poor perceptions about men working with young children is a reason why so few take up primary teaching roles.

He was a late-comer, having been a school governor while working in sales.

The 41-year-old decided to ditch his company car and expense account to go back to university at the age of 34 and is now in his fourth year of teaching.

He said: “I don’t have any hang-ups about men in primary schools. I would talk to as many as possible to get them in. It is a good living.

“I have had two or three male students in with me, but they all wanted to go into secondary school teaching.

“I would always say primary, just for the quality of the child. You feel as though you really make a difference in primary.”

In the TDA survey, 72 per cent said it is important to have equal numbers of male and female primary school teachers.

TDA chief executive Graham Holley said: “Men are under-represented in primary schools and we are keen to improve the balance over time.”