on June 5th, 2011 Posted By BG in Articles
by Katy Read - Star Tribune 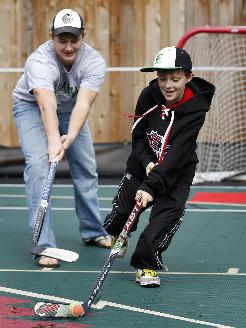 Over the years, Sam Smith of Edina has had four different nannies: two female and two male. All other things being equal, the 10-year-old admitted that he’d rather have a guy.

Sam didn’t say that just because his current nanny, 19-year-old Jared Monsebroten, was sitting right across the family-room table, on the other side of a neat stack of multiplication flash cards.

His main female nannies have been nice, he said, but not particularly active; at times he found himself “sitting there listening to them talk about their life.” And one young woman, who substituted for his regular nanny during one “awful” week, actually forbade him from going outside or playing video games.

“She made me read all day,” Sam said.

Compare that with his weekday afternoons with Monsebroten, filled with the sorts of activities that could appeal to members of either sex but are more commonly enjoyed, frankly, by guys. They both play hockey (Sam’s a goalie on an Edina Hockey Association team, Monsebroten is a former defenseman for the Grafton [N.D.] Spoilers), so in winter, after Sam finishes his homework, the two often head to the rink. They also like shooting baskets, playing Xbox, and engaging the Smiths’ two dogs in games of keep-away.

“Having a boy nanny is kind of like having a big brother,” said Sam, an only child. But unlike many older brothers, “he actually wants to help you and be with you.”

Male nannies — colloquially referred to as “mannies”– are familiar figures in popular culture, popping up on TV shows including “Who’s the Boss,” “Charles in Charge,” “Ally McBeal” and “Friends,” and in the households of Madonna, Britney Spears and Courtney Love (as well as celebrities, presumably, who aren’t outre blonde pop singers).

In ordinary life, though, mannies are actually rare. Nationally only about 2.5 percent of private household child care workers are men, according to the Bureau of Labor Statistics.

But as stereotypes about gender-appropriate occupations fade, mannies are increasingly requested, said Bobette Berno, director of sales and marketing for College Nannies & Tutors, a national nanny-placement service based in Minneapolis.

Among summer child care arrangements, neither a nanny nor a manny is an option for every family. Having someone come to your home to care for your children is the top of the line option, but it can be costly. College Nannies clients, for example, pay a $395 placement fee and $16 an hour for a steady care provider of either gender (whereas family- or center-based child care averages less than $5 an hour). The payoff is the convenience for the kids and their parents, and the lack of disruption to the family’s schedule.

Parents usually seek mannies to care for boys, though not always. Some see them as potential role models. Single mothers may want a masculine influence in their homes. Berno herself hired mannies for her two sons five summers in a row after a female care provider, a nursing student who “looked great on paper,” didn’t work out.

“She had nothing in common with my sons, interest-wise,” Berno said. “She’d take them to a pool and read a book. It ended up being kind of a disastrous summer.”

So the following summer, Berno found her sons a manny. “He took them to the pool, too, but he was jumping off the board with them. He’d take them golfing. They’d play basketball in the driveway. A neighbor told me, ‘I don’t know who’s having more fun, your manny or your kids.'”

Sam’s parents, Chris and Lisa Smith, also are pleased with the relationship that has developed between their son and his manny. The’ve noticed that Sam’s enthusiasm for homework seems boosted by the coolness factor of having a hockey player flipping the flash cards, and that their son’s clothing style has started to echo his caregiver’s.

“Now he only wears hoodie sweatshirts,” Lisa Smith said. “And he’s got to wear his baseball cap all the time.”

Not everyone is comfortable, however, with having their child watched by a young man. Some parents worry that men are more likely to abuse children, though Berno said they’re often comfortable with mannies obtained through personal referrals or placement programs that conduct screenings.

And of course, women also can be active, sports-loving, video game-playing, effective caregivers for boys, said College Nannies CEO and founder Joe Kelley. He recalled matching one family of boys with a female nanny who happened to be a Division One Softball pitcher.

“They, of course, couldn’t hit her fastball, so they gained tremendous respect for her — and for women,” Keeley said.

For young people of either sex, nannying can be a fun gig. Monsebroten got into the work after both male and female classmates at his college, Association Free Lutheran Bible School in Plymouth, recommended it as a good part-time job with attractive hours. Keeley (who, coincidentally, also played hockey for Grafton — Monsebroten remembers as a kid watching Keeley play) founded College Nannies in 2001 after working as a manny himself.

“I’m one of the originals, I would think, other than Mrs. Doubtfire,” Keeley said. On a summer break from the University of St. Thomas, he answered an ad requesting a “hockey-playing role model.” If his macho roommates looked askance at his choice of summer jobs, Keeley got the last laugh when they’d come home exhausted.

“One day, my friends had the glamorous job of digging a pool,” he said. “I spent most of that particular day swimming with the boys in one.”