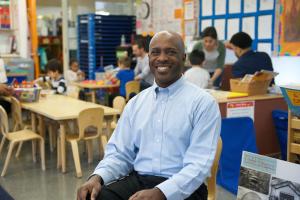 Borough of Manhattan Community College (BMCC/CUNY) has received a $285,000 award from the Foundation for Child Development (FCD) to examine the recruitment, retention, professional development and mentoring of male educators in the New York City Universal Pre-Kindergarten system.

The project began in April 2016 and will extend through July 2018. “Our first phase will be to identify 20 to 25 male early childhood education teachers at sites throughout New York City,” says Jean-Yves Plaisir, Professor of Early Childhood Education and the project’s Principle Investigator. “We will locate participants using a database provided by the New York Early Childhood Professional Development Institute, and look at their motivation for joining the early childhood education workforce; intrinsic, or personal factors, as well as extrinsic, or external factors, such as income or salary.”

Highlighting best practices
In a second phase of the project, Plaisir and a project team comprised of BMCC Teacher Education Professors Kirsten Cole, Megan Fitzgerald Raimundo and Mindi Reich-Shapiro, “will conduct ‘place-based inquiry’, visiting early childhood classrooms led by men who have been mentored and trained in early childhood pedagogy,” he says.

The team will provide feedback and actionable recommendations to the teachers and the agencies they work for. “The idea is to highlight best practices,” says Plaisir. “We would then be available to lead staff development workshops with these male teachers around the areas we’ve identified as places where they could further develop themselves as teachers.”

Ultimately, says Professor Plaisir, the project “seeks to increase high-quality learning for the healthy and lifelong development of children.”

The team plans to publish peer-reviewed articles about their research findings. Plaisir says, “Our research could help inform policy within government agencies responsible for the funding and oversight of local agencies that provide services to families with young children in New York City.”

Another positive outcome of the project is that it has the potential to attract philanthropic support. “Funders are interested in children and the future of our society,” he says. “If we had more scholarship opportunities to offer male students considering this field, that might increase the numbers.”

Changing stereotypes
“I’m excited to be working on this project, which seeks to address this important issue of social justice and equity, beginning by listening to the voices of men in the field,” says Professor Mindi Reich-Shapiro, a project team member. The lack of men in early childhood classrooms, she says, “feeds the stereotype that early childcare is a female role and contributes to the dearth of male role models for young children.”

Project member Meghan Fitzgerald Raimundo has worked with Head Start and the NYC Office of Early Childhood in Queens, Manhattan and the Bronx.

That experience, she says, “has made me able to communicate across systems and disciplines within the field of early childhood education. It is fitting that our BMCC team, among so many senior college and graduate school research teams, earned this award, because historically speaking, it is America’s community colleges that have had the greatest impact in growing America’s early childhood workforce.”

According to team member Kirsten Cole, “Recent federal and local initiatives have sought to increase the numbers of men in the field, but there is little research that seeks to understand what conditions support men in being successful in this essential work. Our study will use qualitative methods to develop a deep understanding of these questions, and contribute to efforts at outreach, retention and professional development of high-quality, male, early childhood teachers.”

Though he is perhaps the exception, Jean-Yves Plaisir, who grew up with five siblings, has found working with small children to be a natural career choice. “I helped raise my nephews and nieces,” he says. “It was a culturally acceptable phenomenon in our family and in Haiti, where I grew up.”

When he was 16 years old, Plaisir says, his father passed away, and he became the father figure for his brother, who is 14 years younger. “I was responsible for attending parent-teacher meetings with him, getting him dressed in the morning and getting him to school.

Today Plaisir, who has focused on bringing more men into the field of early childhood education for more than a decade says, “More young men across many cultures are showing an interest in participating in child rearing activities,” he says. “I think there is a probably a message about responsibility that young men seem to be assuming … I’m seeing more men of color in my early childhood education classes, particularly African American, Latino and Asian men.”