on August 14th, 2012 Posted By BG in Articles
By Jessica Brown - Cincinnati.com 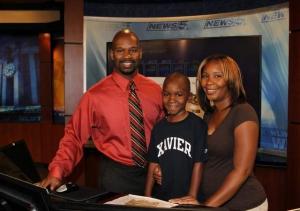 Of all the projects he completed in the Hearts and Minds program this spring, Roman Putman Jr. is most proud of his “future board.”

The shy, well-spoken Fairfield boy, 8, spent hours scanning the pages of magazines for symbols, words or pictures that represent what he wants to do with his life: Become a doctor.

So on his board he pasted a picture of one. Next to it are magazine cutouts of a dog, a convertible and a pretty girl (his future wife).

The project, however, wasn’t just about envisioning his future. It’s also about mapping a course to get there. And Roman already has his “directions.”

“Eat healthy, think big, go to college, set goals, get a good education,” he rattled them off to a reporter.

The pilot Hearts and Minds math and science program is a mentoring, leadership and career development program that targets African American boys in grades 4-6. It uses star-powered mentors, science projects, career discussions and tutoring to keep these boys on track in school and introduce them to math- and science-related careers.

The program operates through volunteer help and in-kind support from Xavier and City Gospel Mission. But Favors hopes to raise money to expand for the next session, which starts in August. Enrollment applications are being accepted now.

“The point is to expose them to their God-given talents and fill the needed diversity gaps in those fields. That’s where the jobs are,” said Favors, a special education teacher for Cincinnati Public Schools’ Academy of Multilingual Immersion Studies

“If we don’t connect them, they’ll end up on the streets or incarcerated.”

Favors should know. While working for CPS, he also tutored youth who were jailed in the Hamilton County Justice Center. Some were as young as 12. Most were black. And they were utterly without hope.

“The light bulb came on,” Favors said. “These kids were in fourth, fifth grade, locked up in an adult type of jail. It blew my mind. I said gosh, there’s more I could be doing beyond the classroom to make an impact.”