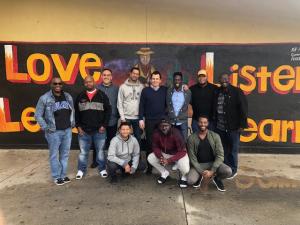 California State University, Northridge has partnered with the University of California, Berkeley and the Compton Unified School District (CUSD) to launch a three-year pilot program to improve the retention rates of male teachers of color.

If successful, the program’s organizers hope that it will provide a national model for increasing the retention rates of African-American, Latino and Asian men who choose careers as teachers.

“We are very lucky to be working with such a forward-thinking school district like the Compton Unified School District, which recognized that we, as a society, have a problem recruiting and then retaining male teachers of color,” said CSUN elementary education professor John Reveles, who received a $250,000 three-year grant from the FEDCO Charitable Foundation for the “Mentoring Male Teachers of Color and Their Administrators: Compton Male Teachers of Color Network (CMTCN).”

“Teacher attrition rates are high enough in general,” Reveles said. “Within the first three years in the classroom, many teachers leave the field for various reasons, and the number is particularly high for male teachers of color. The Compton Unified School District is working with us to create a program that, if successful, can serve as a model for other districts throughout California, and perhaps the nation, for retaining male teachers of color. Teacher retention is so important because students from diverse backgrounds need support systems that encourage them to reach their fullest potential, and an important factor in this equation is the presence of positive male role models. And what better role model — besides a parent —  is there than a teacher?”

Officials with the Compton Unified School District said they were looking forward to collaborating with Reveles and his colleague Travis Bristol, a faculty member at UC Berkeley’s Graduate School of Education, to create an environment that provides the kind of support that encourages men of color to stay and thrive in the teaching profession.

“We are excited to be the site of this innovative partnership with CSUN, and we look forward to seeing its impact on our teaching staff,” said Darin Brawly, superintendent of the Compton Unified School District. “It is important to us that CUSD is a place that they want to work, but also is a district that fosters growth and success. I am already impressed with the work that has begun this month with Dr. John M. Reveles and Dr. Travis J. Bristol. Out staff is excited and positive about it. At the end of the day, it is good for our students.”

Micah Ali, president of the Compton Unified School District Board of Trustees, agreed.

“Male teachers of color are vital to our success as a district in achieving educational equity for our students,” Ali said. “I recall how impactful it was for me as a student to be taught by a male teacher of color — to see him as a mentor and role model. This program will hopefully be a way that we as a district can deepen our commitment to diversity, while providing a source of inspiration for our students — who see male teachers of color as positive examples of their future selves.”

Reveles and Bristol are spending the first year of the project, which started this month, training teachers and administrators at one school within the Compton district on how to mentor and support new teachers, particularly men of color.

Reveles said the program will grow during its second and third years to include more teachers and schools.

“When you create a network to support male teachers of color, they feel like they belong to the school culture and are more likely to stay in the district and the school they are working at,” he said.

Throughout the project, Reveles said, its organizers will ask participants for their feedback to ensure that the model being designed truly meets the teachers’ needs.

“It’s important that we listen and are flexible,” he said. “Teachers need to know that we are here for them, and that the model we create is one that helps them become better teachers, and teachers who are happy to stay in the profession.

“Working with a smaller district like Compton allows an environment where it’s easier to get regular feedback about what works and doesn’t work,” Reveles said. “Hopefully, we can take what we learn and scale it up, and share it with other districts here in Los Angeles County and perhaps across the country. Ideally, it will be a model that is flexible enough to respond to the needs of each individual community. The needs of a school district in Los Angeles are going to be different than those in Northern California, and the same can be said for schools in the Midwest and on the East Coast.

“The ultimate goal is to increase the number of men of color who become and remain teachers,” he said.

Compton Unified School District is located in the south-central region of Los Angeles County. The district encompasses the city of Compton and portions of the cities of Carson and Los Angeles. The district currently serves nearly 24,000 students at 36 sites and has emerged from a dramatic turnaround, marked by increases in student achievement rates, a graduation rate of nearly 90 percent (according to the California Dashboard), facilities improvements and a focus on STEAM (science, technology, engineering, arts, math) throughout all schools. The mission of the Compton Unified School District is to empower leaders to lead, teachers to teach and students to learn by fostering an environment that encourages leaders and teachers to be visionary, innovative and accountable for the achievement of all students.
For more information about the district, visit http://www.compton.k12.ca.us.
[MenTeach has served as lead consultant to the F2MTC project.]