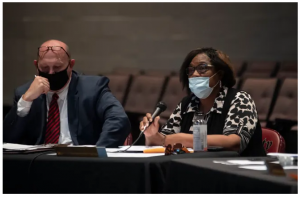 For July, there were 77 new hires, 23 resignations and 18 remaining vacancies for Jackson-Madison County School System, as of Monday.

But, the need for minority teachers – their recruitment and retention – is being discussed among the school board again because of the demographics of the new hires.

“We came in July, and a lot of positions are filled,” Ricky Catlett, deputy superintendent of operations, business and communications, said. “I do believe if given the time to have a cycle to recruit, we may make it happen.”

What’s different, next?
Deputy Superintendent of Operations, Business, and Finance, Ricky Catlett attends the JMC School Board of Education meeting at Liberty High School in there auditorium to practice social-distancing in Jackson, Tenn., Monday, Aug. 10, 2020.

JMCSS has changed the teacher resignation form to include race, Catlett said. That way, the district can track the demographics of who is leaving.

With that data, the district will be able to look at a school’s teacher demographics and focus on a school’s racial balance and how it was affected by a resignation.

But, applicants representing that demographic are not always available, Catlett said.

Catlett said he wants to restart a mentoring program, where veteran teachers mentor newcomers; recruit from colleges and universities, such as Union; and promote and utilize programs that create and encourage teachers.

Before the new administration, leadership also had plans to go to Historically Black Colleges and Universities (HBCUs) to recruit minority teachers.

Same discussion, different day
School Board member Janice Hampton talks during the JMCSS School Board Candidate forum at Jackson City Hall Council Room in Jackson, Tenn., about her rerunning for the District 6, Position 1, Thursday, July 16, 2020. Seven of the eleven school board members participated in the forum.

In 2018, board member Janice Hampton asked for the formation of a teacher retention committee to learn why teachers are leaving the system and find ways to stop that.

In Feb. 2019, the board’s policy committee discussed teacher retention, particularly for minorities, and ways to attract teaching candidates straight out of college. The committee considered pay rates, city perks and teacher incentives as well as community engagement events and programs to bring people to Jackson.

In Aug. 2019, leadership addressed the lack of minority teacher recruitment and retention as they discussed retention starting at the school-level, the shortage of people entering the field, applicants of color not being interviewed or hired and how many are recruited, applying and hired.

It’s a state and national problem that board members have voiced as needing to be addressed locally.

The presence of more Black males can better the schools because students will have someone to look up to.

Over the past year, board members have expressed the importance minority teacher recruitment and retention as the need for teachers to mirror the student population and represent the makeup of the district.

JMCSS has 58 percent African American and 30 percent Caucasian students with Hispanic, Latino and other nationalities making up the 12 percent.

Last year, Hampton said children seeing teachers, staff and representatives who look like them will encourage them to say, “They’re doing it. I can do it.”
Board member suggestions

Board member A.J. Massey reiterated a point he’s often made: wanting to know the demographics of applicants so that JMCSS knows if enough are applying. While the district can ask an applicant for his or her race, that applicant isn’t required to answer.

“I want us to hire the best, possible educators, regardless of race,” Massey said. “I want to see that we’re tracking. Is it that we just don’t see the applicants or are we not hiring?

An example he provided is that there shouldn’t be 50% of minority applicants with only 10% being hired.

He said everyone should be given a fair chance.

Hampton said the district needs a recruiter, which is also what Johnson has requested to address the “critical” issue of teacher shortages. Teacher retention has been an issue he’s discussed at almost every meeting since becoming chair in October.

“If we’re not getting them in, then we need someone to go out and find them,” Hampton said.

Johnson wants to see a documented plan about diversity in teacher retention.

“We consider it a positive conversation when our board members make a point to remind our principals and Human Resource department to make an effort to hire the best applicants and be mindful that our employee demographic should in some ways mirror the demographics of our school district,” Greg Hammond, chief of staff and public information said.
‘Give us a chance’

Catlett asked for a chance to start and implement a process.

“It’s under my watch, and I want to make sure that our district has the best people to teach our students,” he said. Just give us an opportunity to get a system in place.”

Hammond echoed Catlett’s message of “Give us a chance to improve these numbers.”

“When issues are identified, issues can be addressed,” Hammond said. “We thank our board members for their oversight and feedback in the area of employee hiring. This issue has been identified, and as Dr. Catlett said tonight (Monday), it will be addressed.

“This administration is just 40 days into this leadership era and has not been here long enough to participate in a complete hiring cycle.”

Lasherica Thornton is The Jackson Sun’s education reporter. Reach her at 731-343-9133 or by email atlthornton@jacksonsun.com. Follow her on Twitter: @LashericaT