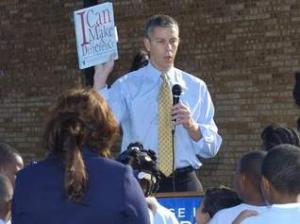 Applause erupted Friday during a roundtable discussion at Jackson State University, and some of it was for the visiting national education secretary.

But much was for JSU students interning at the university’s Children’s Defense Fund Freedom School, who spoke about the importance of teachers and teaching.

The perception about teaching should change, former intern Rodney Phillips said to applause. After suggesting a national media campaign to “express the dire need to educate our youth,” he received more applause.

Duncan was at JSU as part of an eight-state, two-week bus tour to honor teachers. The tour began Thursday in Little Rock, Ark.

Friday’s event was a way for Duncan to learn more about the Freedom School, an after-school program that is part of Kids Kollege and an initiative of the Children’s Defense Fund.

“The future belongs to those who give the next generation hope,” Edelman said.

Duncan heard testimonies from students about their passion for teaching and their views on the Freedom School.

Tramell Tillman said he started college at Xavier University in New Orleans, but transferred to JSU at his parents’ request after Hurricane Katrina. He was trained at the Freedom School, and told Duncan and the audience that words couldn’t describe “the impact that that training had on me.”

Five years ago, Tillman read to students at Barr Elementary School in Jackson, said Carolyn Coleman, director of the Kids Kollege. Coleman said the school principal told her, “It was one of the first times some of those children had a black male read to them.”

Duncan and the students talked about the need to have more men, including those who are black or Hispanic, teach.

“If you have a bad experience before college, you’re not going to want to be a teacher,” she said.

Duncan noted the Freedom School children were loud – they clapped and chanted for him at the beginning of the visit – but were some of the best-behaved children he had seen.

The interns attributed the good behavior to the structure of the Freedom School, where the ratio of students to teachers is 10 to 1.

The children are called “scholars.” Instead of being told what not to do, they sign a cooperation agreement and are told about the expectations of the program, said Nolan Carr, who is now a teacher and trains Freedom School interns.

In Freedom School, “scholars” have fun while they learn, he said. Carr said when he was in school, he didn’t have fun, “so I got in trouble.”