on June 8th, 2010 Posted By BG in Articles
by Doug Carey - Examiner 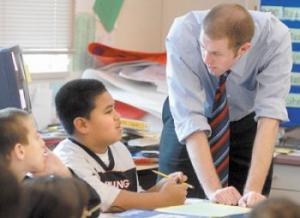 At our kids’ school, teacher assignment letters are more anticipated than Santa on Christmas day. As soon as they arrive, the moms start texting each other at breakneck speed. When one of my son’s friends learned he was assigned a male teacher, his parents were less than pleased.

“(Our son) just doesn’t do well with male teachers,” said the mom.

Note that this rather large generalization was based solely on the experience from last year in second grade, when the child had a male teacher for the first time.

Forget for a moment this parent’s immediate overreaction; she later gained some perspective and now says she’ll reserve judgment until she’s at least met the teacher. However, it does illustrate the battle male teachers face everyday. Assuming the teacher is qualified, I would argue the parent should be happy her son was placed with a male teacher.

According to a story by education expert Tamar Snyder, the parent’s son beat the odds by having a male teacher two years in a row. Men account for just 16 percent of all elementary school teachers, according to a 2003 National Schools and Staffing Survey. Here’s an excerpt from Snyder’s report:

Why the downward trend in male teaching? According to Bryan Nelson, founder of MenTeach, a nonprofit organization dedicated to recruiting male teachers, research suggests three key reasons for the shortage of male teachers: low status and pay, the perception that teaching is “women’s work,” and the fear of accusation of child abuse.

“There’s a lack of support for male teachers, a lack of respect, and a lack of being able to be involved in decision-making,” says Reg Weaver, president of the National Education Association (NEA). “And I can’t say it’s getting better.”

Low salary levels have also proved to be a deterrent, especially for those men who value being the breadwinners of the family. The average U.S. public school teacher salary for 2005-2006 was $49,026, according to the NEA. “There’s a long-entrenched idea that males are supposed to make lots of money and be a big-time breadwinner,” Brown says. “But teaching won’t make anyone rich.”

And then there are gender stereotypes to contend with. “Particularly in the younger grades, women are seen as nurturers,” says Brown. “Men, not so much.”