on March 31st, 2020 Posted By admin in Articles
by Marissa Couch - The Wright State Guardian 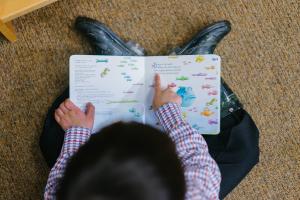 Upon walking into a childcare facility, the majority of the teachers employed will be female. The ratio of men working in a childcare program compared to females is heavily skewed.

Wright State University student Jacob Shaw has worked with children for most of his life.

He currently holds a position at a local childcare center as he pursues his bachelor of science in Elementary Education.

“I think that it is still fairly uncommon to have a male teacher with young kids, especially at a childcare facility,” said Shaw. “I can tell that some of the parents don’t know how to react, especially with some of the younger children. I’ve had parents give me strange looks when they walk in and see me in the room and have even asked me before if they were allowed to leave their child with me.”

There are requirements to work in a childcare program according to both state guidelines and per each center’s rules, none of which include limitations on gender. Capability and experience are the basis to work with children.

That does not mean that there aren’t other ways to avoid treating employees equally in the workplace.

“I honestly wasn’t sure if my gender would play a role in me getting the job or not,” said Shaw, “I didn’t know if doing so would cause any issue not only with the management of the facility but with the parents as well.”

According to the Ohio Department of Job and Family Services (ODJFS), staff members in a childcare program must have obtained their high school diploma, have updated medical history on file and be at least 18 years of age. Further requirements vary depending on the childcare program.

Due to the Equal Employment Opportunity Commission (EEOC), there generally will not openly be regulations regarding whether or not a male employee has the same amount as duties as a female employee in a childcare center. The EEOC website provides examples of misconduct as well as instructions on how to report any direct violations.

Including sexual orientation, race, genetics or age as a job requirement is a direct violation of the EEOC. This commission specifically protects employees from workplace discrimination.

“There is a double standard for sure, and I am guilty of this, but I feel like I would rather have the diaper changed by other women,” said Collins. “At the same time, if I met the person, male or female, I don’t think it would be an issue if they have a good character. If they have a positive rapport with my child and if they were comfortable with me observing the classroom, no matter what their gender is, I would be fine.”

Sasha Blaine has one daughter who has attended the same childcare facility throughout infancy through pre-school. Blaine has another daughter on the way and has had experience in working with male and female caregivers throughout her daughter’s time in school.

“We want our girls if they’re good at math and science to be welcomed into STEM. We want them to be doctors, lawyers, presidents. If we have compassionate and caring boys that decide that they want to go into childcare, we have to give them the same platforms to do that that we give girls the platform to go into analytical and academic professions,” said Blaine.

According to Blaine, there is potential to create a bias when a parent has a negative experience with a caregiver, regardless of gender.

“We were just really lucky to have positive experiences with male teachers we’ve interacted with. It’s hard to really know because overwhelmingly, childcare providers are female. It’s hard to say because they’re so underrepresented,” said Blaine. “On the flip side, there used to be a lot of professions where women are underrepresented so any flaw they might have might be more obvious. I’m sure the first handful of female lawyers were judged pretty harshly and they had to be better than everyone else,” said Blaine.

“I’m sure it’s the same with male caregivers, they still haven’t really broken into that industry as much so they have a lot to prove because people aren’t used to seeing them there,” said Blaine.

Chad Nunamaker is a member of the graduate faculty at WSU and is currently working on his Ph.D. in Early Childhood Education. He has been in the education field since 2004.

“All great teachers are nurturers at heart because they care about the development of their students. It is critical for young children across the early childhood and elementary years to see men in nurturing roles such as teaching. When children at a young age get to see gender diversity across a variety of roles, and people doing the exact same type of work in these roles regardless of their gender, they gain a more robust and informed perspective on the diversity inherent in our society,” said Nunamaker.

A male being limited in work duties results in another teacher having to pick up the work he cannot do. If a male is restricted from changing diapers or assisting with toileting, there are classrooms he will not be able to help in at all.

“Nurturing, caring for and teaching young children are stereotypically not masculine roles, but why not? Do we really want children to grow up thinking that a person cannot be masculine, nurturing and caring at the same time?” said Nunamaker. “Do we really want children to think certain types of work are only for a specific gender? We have a duty to critically reflect on the messages we are sending young children and ensure that they align with our values as educators.”

MenTeach.org is a forum for men that provides a safe space to discuss issues they face in the field and to support one another. Education is not as common of a job choice for men as it is for women, therefore men are often underrepresented and have the forum to confide in others.

There are many posts on MenTeach.org addressing the fact that men sometimes feel out of place working in a childcare program due to their gender. Whether it is from employers, coworkers or parents, there is often a divide in which men are treated differently than women.

It has been noted on MenTeach.org that some programs have learned to place employees strategically to avoid having a male staff member toileting and diapering in younger classrooms.