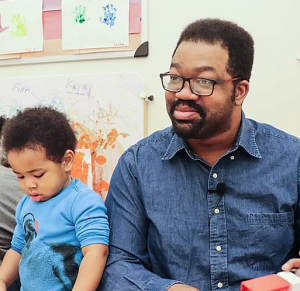 There’s a new push to increase the number of men of color in the classroom. According to the nonprofit Early Learning Indiana, there’s a major lack of ethnic and gender diversity in early childhood education.

Pre-K Teacher Zachary Ferguson loves his job. Everything from story time over Zoom calls, to his time back in the classroom.

“I enjoy putting a smile on their faces, I enjoy them calling out my name when I see them in the morning,” said Ferguson.

He’s spent eight years at Day Early Learning, and for most of that time he explained, “I was the only man at this center for a while.”

Growing up for Ferguson was the same.

“I didn’t have a male teacher until I got to middle school,” he added.

A new initiative by Early Learning Indiana and the Educate Me Foundation is hoping to change that. The two groups have launched a program to bring diversity to the classroom. It’s called Educate ME Early.

“This is an impressionable age,” said Ferguson. “Whether he’s Caucasian, Black, Latino, just to see that different type of diversity in your classroom is wonderful.”

According to Early Learning Indiana, people of color represent only 14% of the early childhood workforce in Indiana.

“Zachary is a great example because from my story too, when I’m interviewing candidates and talking to young men, I’m letting them know I started in early learning education as well,” said Blake Nathan, the CEO and founder of Educate Me.

Nathan wants to fix the underrepresentation, and its mission is to recruit and retain black educators.

“For eight hours of the day, if they see a black man in their classroom, they won’t think that black men are in education. So, for us, that’s why it’s so truly important to us,” said Nathan, “If you have a tug in your heart and you want to make a difference in our community, you definitely want to start in early learning education.”
As part of the program, Black and Latino men who apply will make a two-year commitment. In the first year, they’ll co-lead a classroom, and in the second year transition to being a full-time teacher. Nathan is interviewing men now and want to invite others to get involved.

“You cannot aspire to be anything that you cannot see,” said Nathan.

Ferguson added, “Hopefully that helps them do things in the future being a respectable young man and carrying themselves with dignity.”

The goal of the program is to also create a new talent pipeline for early education. Early Learning Indiana projects a shortfall of more than 9,000 childcare workers and teachers by the year 2027.To learn more or apply for the Educate ME Early program.