on February 25th, 2017 Posted By BG in Articles
by Curtis Bunn - Indianapolis Recorder 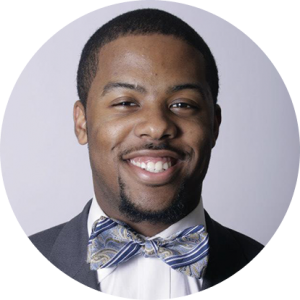 The axiom, “Those who cannot do, teach,” missed the point, as far as Blake Nathan is concerned.

In fact, Nathan created the Educate ME Foundation on a wholly opposite premise: To mentor and encourage African-American students, high school and college, to pursue careers in education, especially as teachers—and to help existing Black teachers find new opportunities.

All with one goal, Nathan said: “To increase the number of African-American teachers in classrooms where they would have a cultural connection. That dynamic makes a huge difference for Black students.”

Nathan, 27, speaks from his own experience. Growing up outside Atlanta, he said he had just three Black teachers from kindergarten through 12th grade. While in undergrad at historically Black Tennessee State University, he said he had just five African-American professors.

Then, as a middle school teacher, in Indianapolis, Nathan said he was the only Black male teacher in his district.

“There are hundreds of thousands of (Black) students who have the same story as me,” he told Urban News Service. “Having taught Black students, I know how important it is for them to have someone who has been where they are, someone who can relate to them on a personal level and have that cultural competency with them.

“There’s nothing like it. Teachers spend countless hours with students, and so it’s important that a student is able to express himself on a personal level at times and have teachers that have empathy for him, not sympathy. You also can give a kid tough love based on knowing the emotions that come with what he’s going through.”

Understanding this, Nathan launched the Educate ME Foundation. “I could sit in my classroom and write my lesson plan or I could do something about this issue,” he said. “I decided to do something.”

Four others followed Nathan’s “leap of faith” to make up his staff. Everyone works as a volunteer, even Nathan as C.E.O.

The national statistics moved them. According to the U.S. Department of Education, African-Americans make up just 9 percent of the teaching work force—with only 2 percent being male teachers. At the same time, a Project STAR (Student Teacher Achievement Ratio) study of 23,544 Black students showed that “having a Black teacher for a year influenced a significant 3 to 5 percentile-point increase in math scores. Reading test scores of Black students with Black teachers were 3 to 6 percentage points higher.”

Additionally, a series of experiments conducted at Stanford University found that African-American teachers “may be more generous with minority students, devoting more time to them and making more favorable assumptions about their capabilities.”

Nathan developed the Educate ME Foundation to address those statistics. It is a multi-faceted organization that, in addition to its placement services, hosts an annual HBCU tour that attracts more than 300 students and enlightens them on the value of a career in education.

Operating in its first year, it has more than 60 would-be and current educators on its roster. It serves as a “teacher agent,” Nathan said, aiding prospects in finding jobs across the country. It has placed teachers in positions in Atlanta, Houston, New York, Miami and Nashville, among other cities.

“(Often) trainers have no clue on how to retain (Black) teachers in an urban school setting,” said Dixeen Tolliver, a sixth-grade teacher who has worked for 25 years in the Richmond, VA school system. “Many other teachers of different cultures lack the patience and understanding it takes to reach African-American students. And many of the ones who try to have patience tend to limit the students’ ability instead of having empathy. . .  Educate ME is a necessity.”

“I’m for anything that creates more Black teachers. I went to private schools and I had just three Black teachers. But I felt there was much more of a connection with the African-American teachers. Other students talked about it, too. Having a teacher, you can relate to helps you to connect and believe in yourself more.” said Malik Williams, a freshman at Georgia State University in Atlanta.

The stigma that teaching is a low-paying, thankless job is a disconnect with Nathan. “A doctor would take 10 years after graduating college to make good money,” he said. “But as a teacher, in 10 years, you can elevate up the ranks, to assistant principal or administrator and make six figures.

“I made $40,000 last year, working just eight months. But I coached baseball and a step team that earned me more money. And while my friends who made $60,000 were working all summer, I was off and relaxing at home for four months. So, it’s a misconception. There’s money out there in education.

“Every district in the country is looking for competent Black teachers to work with Black students, to resonate with them. We’re working to be that pipeline that brings it all together.”