on October 1st, 2016 Posted By BG in Articles
by Jay Hare - Dothan Eagle 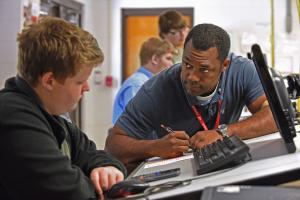 Rodney McCloud is something of a rarity in the education profession. He’s an African American male educator who teaches a STEM-related class.

McCloud said that getting more African American men in the classroom is essential to the development of many students.

“A number of kids come from homes without a male figure in them at all,” he said. “I’d guess to say the number of those that have a personal relationship with a black male is even smaller. Young black men especially need positive role models more than anyone. Again, outside of coaches and possibly a pastor, they probably don’t have a positive role model. They need someone they can get to know and learn from as opposed to idolizing an artist or athlete.”

“It’s important for students to see a role model that looks like them,” he said. “You don’t have to be the same race or gender to connect with students – all teachers have to care about their students – but sometimes it helps to see someone that looks like you to show that you can follow in their footsteps.”

McCloud comes from a family of educators. His mother’s side of the family has more than six people working in education and his mother was a teacher for 32 years. McCloud said his family experience with education initially turned him off to the career.

McCloud moved into a career in education as a result of a random visit to meet one of his former instructors at Wallace Community College. McCloud’s instructor asked him to stick around and answer student questions while he attended a brief meeting.

“I was hesitant to as I’d never been in charge, but I did know the material,” he said. “After 30 mintues, he returned and I had moved around the room and helped a number of students. He then asked me if I was interested in working part-time in the lab as an adjunct.”

McCloud began working as an adjunct instructor and by the time a full-time teaching job opened at Carroll, he was hooked.

McCloud said that males do face some big challenges in the teaching profession, however.

“Outside of coaches, most kids don’t have fond experiences with male teachers,” he said. “…Teenagers don’t’ see that you’re pushing them to get the most out of them. I’ve met a lot of kids with bad experiences that hate school.”

Darius McKay is the principal of Girard Middle School. McKay also transitioned into education from outside the field. McKay was a chemist, but got into teaching because he enjoyed the opportunity to mentor young men and women.

McKay said school systems could draw more men into the profession by more aggressively recruiting at colleges and universities. Signing bonuses and other incentives could also help encourage more men to pursue careers in education, he said.

McKay said that one unsung benefit of a career in education is job security for teachers in certain fields of education.

“If you’re a male and you’re in math or science, you’re practically guaranteed a job,” he said.