on May 8th, 2011 Posted By BG in Articles
by Tanisha Duverney - Senior Reporter 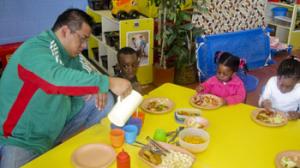 David Lockwood is the only male ECE professor at Humber. He said children need both female and male role models in their lives.

“There are very few men who go into the field of child psychology and then there are fewer who are interested in the practical aspect of working with young children,” said Lockwood.
Lockwood said men are seen as strange if they want to work with children.

“Society needs an attitude adjustment when it comes to the role of an early childhood educator,” he said. “They need to recognize that childcare is not babysitting.”
Jabin Carrasco is one of two male employees working at Humber’s Child Development Centre.

Carrasco started as a student in the business administration program and worked part time at the daycare. After realizing how much he enjoyed working with children, he changed his program, graduated from ECE and began working at the centre full time.
“I’ve learned that the first five or six years of a child’s life is when they will learn most of what they are going to use for the rest of their life,” said Carrasco. He said he can impact them more at this age than when they are older.
“Kids are like sponges and they absorb everything and I wanted to be a part of that,” he said.

Early years manager Noreen Hornsby, said boys and girls should have interaction with both sexes, since men and women engage with children differently.
Hornsby said it’s ideal to have male figures, because they have a different approach and tend to be better observers.

“It demonstrates that males have a nurturing side and can be responsive and empathetic. Men can have a significant role in the raising and upbringing and learning of our children,” she said.