on March 29th, 2016 Posted By BG in Articles
By Ariel Worthy - Birmingham Times 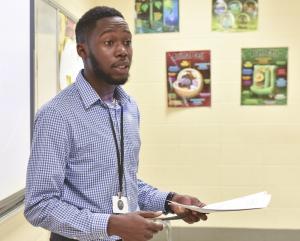 A room full of 12 and 13-year-olds in a seventh grade Pre-AP science class cut open raw chicken wings to identify the muscles, bones and ligaments.

“What connects the muscle to the bone?” asks teacher Christopher Mosley at Hudson K-8 School.

Mosley then asks a table of students another question as he shows them the veins: “Can you imagine blood flowing through something that thin?”

Mosley, 24, is part of Teach For America’s efforts to recruit more diverse teachers to local classrooms.

Nationally, only 7 percent of teachers are black and just 2 percent are black males.

Mosley, 24, and Wayne Jackson, 38, a special education teacher at Hayes K-8 School are in that 2 percent.

Teach for America (TFA) recruits college graduates from universities across the country to serve as teachers for at least two years in low-income communities. TFA recently formed a partnership with Alpha Phi Alpha Fraternity to increase the number of black men in teaching.

TFA formed in Alabama 2010 with 30 teachers across the state. Over the past six years more than 350 teachers have been placed in Birmingham, Bessemer, Huntsville, Montgomery and in the Black Belt. Currently the group has about 150 actively teaching across the state with 34 in Birmingham. Black males make up 20 percent of the teaching corps with TFA.

For the first time in the U.S., students of color represent the majority of students in public schools, but national teaching force doesn’t reflect that diversity.

“It’s stifling,” said Mosley, of the lack of black male teachers in the country. “When you think of the demographics in inner-city schools, the teacher workforce does not reflect that and especially our black students – particularly our black men – need positive role models.”

Why so few?
So why are there so few black men teaching?

Mosley thinks it might be because other careers are more lucrative.

“I don’t feel like [teachers] are compensated enough for the challenges and demands faced on a day-to-day basis,” he said.

He added, “black males, especially those who faced opposition all throughout their lives, when they find a way to get to college and advance themselves they would rather take on more lucrative careers than try to assume a role of a teacher, where you wouldn’t make as much money and it’s not as much ‘prestige.’”

Jackson said, “It can be a frustrating job at times, and I think it has to be more done with increasing a living wage and increasing the support for them. But it’s not a job you come in to be rich. It has to be that desire to teach and help kids grow.”

With the amount of challenges faced by black children, especially with incarceration and death rates, both teachers feel that it is important for students to have a mentor.

“You see percentages that are disproportionately against black males compared to their white counterparts, so being in the school system and showing our students that they can be successful without being a basketball player or a rap star is important to me.” Mosley said.

Increasing the numbers of teachers are important because some students do not have a male figure in their lives, he said.

“When you have a black male teacher it gives them an example to follow, and I think it allows them to set a value on education.” Mosley said.

‘Their formative years’
For Mosley it was a no-brainer which age group he wanted to teach.

“I wanted to do middle school because these are their formative years” Mosley said.

Students discover their self-identity during middle school, he said.

Mosley said he faces challenge that his colleagues do not. For example, because of his age, Mosley feels that “a lot of my students don’t quite know what respect is yet in terms of looking me in the eye and talking directly to me; I’m constantly finding that I have to assert my authority without having to raise my voice.”

Monte Linebarger, a principal at Central Elementary School in Tuscaloosa, said in an interview last year that black men can deal with black students better when it comes to discipline.

“We don’t always look to suspend a child as the solution,” he said. “Sometimes you need to have a conversation with the child; find alternative methods.”

“I try to talk to them and explain to them why certain things and actions aren’t okay, and show them ways that they can approach situations differently so we can minimize occurrences,” Mosley said.

Teaching Methods
“One thing I have realized is that I have to make my classroom engaging for my students,” Mosley said.  He has found that hands-on lessons and group activities work better.

“I have to draw them in before I start teaching,” Mosley said.

At Hayes K-8, Jackson has a similar method of teaching. This is Jackson’s second year with TFA. Last year he taught fifth grade.

“I taught them how to debate in a respectful way,” Jackson said of his students. “I encouraged them to challenge something they disagree with.”

Jackson said his favorite subject to teach was social studies, and related it to social justice.

“I wanted them to express themselves,” Jackson said. “Kids at that age rarely have a platform to explain how they feel. I would ask them how they felt about things like [police involved shootings of black males] Tamir Rice, Freddie Gray, or Trayvon Martin. I would make a comparison on how we view black-on-black crime compared to police officer killings.”

Jackson’s goal was not to tell them how to think, but rather for them to develop that thought process on such issues. “That way, they could go home and have those conversations with their parents,” he said.

Life lessons
While teaching, Jackson wants to include all students which is why he introduced a cycling team to the school which is open to anyone with good grades. Part of his goal was to show students that non-traditional sports can be as appealing as basketball, football and baseball.

“It’s a very inclusive sport,” said Jackson, of the mountain biking team. “We have one kid in the band, another girl said this is her first sport, and she wants to do it in high school, and we have a seventh grader who plays different sports: baseball and football.”

The students had their first race a couple of weeks ago at Tannehill State Park and one of their students placed fourth place.

“I was mad that I didn’t get third place because I wanted to be on the podium, but this time I’m going to be in first place,” Kamryn Emanuel, 14, said.

The sport has taught students lessons that they can also take with them in life, Jackson said.

“We had our seventh grade boy who fell off the bike once, and one time he got off his bike to help another student who had fallen,” he said. “I wasn’t going to penalize him for showing good character. Those are the kind of things that we want them to learn in life.”