on June 11th, 2020 Posted By alharris in Articles
By Justin Mattingly - Richmond Times-Dispatch 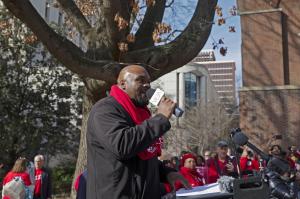 In 1992, as a sophomore at Arcadia High School in Accomack County, James Fedderman needed an A on the final exam in order to pass his English class.

He was the center of attention — in a good way, his English teacher, Liz Kuhns, said — and full of life, but struggled in school. He finished ninth grade with a 0.86 GPA and waited until the last minute to get serious about his classes.

Fedderman’s mother stayed in school until the eighth grade. His father never went. Both became drug dealers. Their son, determined to chart a different course, dreamed of one day working with children.

In that classroom on the Eastern Shore of Virginia, Fedderman stared at 10 short-answer essay questions. He used all the time allotted to him and after handing it in, did not leave the room like the rest of his peers.

Kuhns graded the exam, finding that Fedderman had aced it, getting a perfect 100 and the A he needed to pass the class.

“Holding him accountable to that was what made him realize that he needed to work consistently like that through the entire school year instead of waiting until the end and needing to really blow it out of the water in order to pass,” Kuhns said. She added that Fedderman later told her about the importance of that exam as the two stayed in touch after graduation.

Now he’s one of the most powerful teachers in Virginia.

This month his peers elected Fedderman as the next president of the Virginia Education Association, making him the first African American male to hold the title. Fedderman has served as the union’s vice president since 2016.

Come Aug. 1, when his two-year term starts, he will lead an organization that hopes to get teachers the abilities to bargain collectively in cities across the state and mitigate the impact of the COVID-19 pandemic.

“It’s such an unprecedented time. I feel like my leadership is going to be able to define a lot of things on what the next normal will look like,” Fedderman said. “I’m happy to be a part of that movement for children and for public education, improving the working conditions for our employees and learning conditions for our students.”

“It’s an incredible crown on a very long and hard-fought journey for him,” Kuhns said.

Fedderman, 44, grew up on the Eastern Shore and struggled in school until teachers like Kuhns helped redefine his experience. He graduated in 1994 and set out to give back as an educator, enrolling at Longwood University.

When he told his parents of his college plans, his mother, who would die when Fedderman was in his early 20s, cashed in a life insurance policy to give him money to get started — trying to give her son the schooling she never received.

“I feel like I have cracked the glass ceiling for generations behind me to acknowledge that everything is possible with hard work, perseverance, dedication, commitment and also strategically aligning ourselves for the ultimate goal — whatever that is,” he said.

Since the VEA, the state’s largest teachers union with roughly 40,000 members, merged with the historically black Virginia Teachers Association in 1967, the organization has had three African American women serve as president.

This year, Fedderman defeated Ingrid Gant, the president of the Arlington Education Association, and Cheryl Turpin, a Virginia Beach teacher who previously served in the House of Delegates, to become the first black male president.

Livingston, the outgoing president, called Fedderman’s election a “huge step forward” for the union and the state.

“We’re still in Virginia dealing with too many vestiges of segregation and it’s time we really step on the gas to eradicate those shortcomings,” he said.

Replacing Fedderman as vice president, where he was also the first black man to hold that title, will be Carol Bauer, a fourth-grade teacher from York County.

Fedderman will lead the union while representing an underrepresented group in education.

While students of color make up more than half of the student population in the U.S., roughly four in five teachers are white and 77% are female, according to federal data. Only 2% are black men.

In Virginia, 21% of the state’s teachers are not white, according to a 2017 report from a state panel tasked with recommending how to make Virginia’s teacher workforce more diverse. The report did not include specific data on black male teachers and Virginia is one of six states that does not track teachers’ race and ethnicity.

“The space that we’re occupying — it’s long overdue,” Fedderman said, adding that he’s happy to be the first black male VEA president but “very disheartened that it has taken this long.”

Robinson, who teaches in Richmond Public Schools, was named National Teacher of the Year last year, becoming the first black male teacher to win since Michigan’s Thomas Fleming in 1992. Robinson, the first Richmond teacher to win the award and just the third from Virginia, has spent the past year touring the U.S. advocating for more black male teachers in the classroom.

“Every kid benefits from diversity,” said Robinson. He added: “We’re starting to finally get the recognition. It’s our responsibility to lift up the next generation of black male teachers.”

Fedderman’s election comes at a critical time for the union and education in Virginia, with new collective bargaining power and a pandemic that could hurt funding similarly to the financial crisis of 2007-09.

The General Assembly passed legislation this year giving public sector employees, including teachers, the ability to collectively bargain if their locality signs off on the idea. The measure, set to take effect May 1, 2021, removes Virginia from the list of three states that ban the practice.
Local governing bodies are required to vote within 120 days on collective bargaining if public employees say they want it. Fedderman said the VEA is going to work with each chapter in school districts across the state to voice support.

“It gives our educators a voice and a seat at the table,” he said.

Also at issue is the state of education funding in Virginia, which hasn’t fully recovered from cuts made after the Great Recession, including a cap on school support positions, such as social workers, custodians and psychologists.

Virginia ranks 40th in the U.S. in state per pupil spending, according to a January report from the Joint Legislative Audit and Review Commission, the legislature’s research arm. That same study puts Virginia’s average teacher salary of $51,994 at 31st in the country and below the national average of $56,930.

Teachers were set to get a 2% raise in each year of the two-year budget that lawmakers signed off on in March and that is set to begin July 1, but that proposal and all other new spending were suspended as the state deals with the financial fallout of COVID-19.

Fedderman wants to make sure that the funding cuts that became routine during the last major financial crisis don’t happen again.

“Education is always the first to be cut and the last to be restored,” he said. “It’s incumbent upon us to do what’s right for our children.”

He’ll spend the next two years as VEA president advocating for those children. For the first time, many of those children will have someone in charge who looks like they do.