on March 23rd, 2011 Posted By Bryan G Nelson in Articles
by Sherri Ackerman - The Tampa Tribune 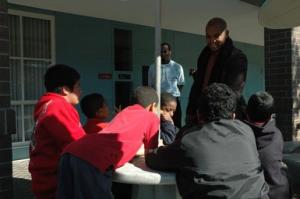 When Clifford Brady walked the halls of Roland Park Elementary some 35 years ago, students knew their hair had better be combed and their shirts clean.

One of them was Lionel Bryant, a sixth-grader who would grow up to work with students at the same school.

“When I looked at that powerful African-American educator, I said ‘Wow!’ ” recalled Bryant, 46. “It was a ‘Wow!’ factor.”

That’s because there weren’t many men teaching in those days – especially black men. There aren’t today, either.

To help recruit and retain more men in the classroom, the district has tapped into a new state program, “Call Me MISTER.”

Created at South Carolina’s Clemson University, the program was designed to attract men to the teaching field. Nationally, men make up less than 2 percent of the profession.

Florida’s program began in 2008 and is focused on increasing the pool of minority educators to teach in elementary schools.

“I’m really excited about it,” said Quincenia Bell, Hillsborough’s recruitment director. “This targets African-American men with a passion for the younger child.”

Compensation, Bell said, has kept more black men from joining the ranks of teachers. Starting teachers make about $37,000 a year and getting to $60,000 can take years.

A new $100 million grant from the Bill & Melinda Gates Foundation aims to improve the quality of teaching, in part by enabling the best teachers to earn more faster.

“It’s definitely a challenge,” said the 33-year-old father of two young children. “But boys and girls at this age both look for mentors. They want to know what should a male be like.”

Anthony tries to be an example, he said, through articulate speech and immaculate dressing.

Men in the classrooms have historically been sports coaches, said Roland Park Principal Dave Burgess. But in today’s society of single-parent, divorced homes, male teachers have so much more to offer.

“A lot of our kids now don’t experience a man in the home,” he said. “We need to do this so they can say, ‘This is possible.’ ”

But statewide, only 38 percent of black males graduate from high school, Gilbert said. Locally, the number is a dismal 7.8 percent, according to the most recent report from the state Department of Education.

“It’s not good,” Gilbert said. “That’s what motivates me.”

He recently met in Tampa with 16 candidates interested in Call Me MISTER – a play on the popular movie, “In the Heat of the Night,” where actor Sidney Poitier delivers his powerful line, “They Call Me Mr. Tibbs.”

Of those 16, five will be chosen after completing an essay and undergoing interviews by Gilbert and others in the program. Winners will be announced next month.

Daytona Beach State College is expected to sign on, too, Gilbert said, and if there’s enough interest in the Tampa Bay area, he will approach Hillsborough Community College.

MISTERs who earn their associate’s degrees and are accepted at a four-year college can receive another $8,000 in tuition assistance from the Florida Fund for Minority Teachers, Gilbert said.

Once they graduate, the men must commit to teach in their communities for four years.

Call Me MISTER wasn’t around for Bryant and the seven other black male teachers at Roland Park, now a combined elementary and middle school in partnership with the Westshore Alliance.

They relied on strong male influences, including Sam Horton, who led the charge to integrate Hillsborough’s public schools, and Brady, who inspired students like Bryant to follow in his footsteps.

“He was telling us young black boys – he didn’t have to say it, we could tell by his actions – we could be anything we wanted to be,” Bryant said.

It’s a message still being heard by students like 10-year-old Delais Cenatus, who never had a male teacher until he started fourth grade this year at Foster Elementary. Now he’s learning language arts from Greg Blake, who left the business world at 29 to become an educator.

“I think he’s really a good teacher,” Delais said. “I learn a bit better from him than I do from female teachers.”

It’s a good lesson no matter the male teacher’s race, said Bell, who hopes to recruit more men in coming years although there are no other programs in place right now.

“They are critical to providing much-needed role models,” she said. “Even for a young girl, it can make an impression on them for the rest of their lives.”

Blake, among 2,286 white male teachers certified in the district, said he thinks he instructs with a man’s point of view. In one assignment, students write a narrative about a Sports Illustrated picture of fans during an Oklahoma State football game.

Behind his desk is a poster of NBA player Kevin Durant of the Oklahoma City Thunder dunking a basketball. Another features The Rays. Shelves of books include a copy of “Jackie’s Nine,” about baseball great Jackie Robinson.

“I think a lot of them like it,” Blake said. “Usually, there are a handful of girls who say ‘We’ve never had a man for a teacher before!’ ”

Most educators say teachers are all trained the same way, but what’s different is how boys and girls relate to them.

For more information about Call Me MISTER, contact Gilbert at (386) 329-1294 or email him at gilbertu@nefec.org