on November 2nd, 2015 Posted By BG in Articles
By Lindsey Kilbride - WJCT 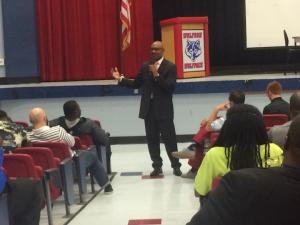 Friday was an early-release day at Wolfson High. By 2 p.m., the students were gone, but the auditorium was filled with male teachers.

The reason? They’re part of a newly-formed male teachers’ network in Duval County.

“You know when you walk into the classroom or walk into any school, you’re lacking the male figure, ”Bostic said.

He says a big reason for that seems to be pay. When Bostic asked the teachers how many wish to become assistant principals, about a third of the audience raised their hands.

But he says schools need men in the classrooms too, because a lot of students are missing male figures in their homes.

Richard Murphey is a social studies teacher at Mattie V. Rutherford alternative school. He says he appreciates meeting with others whom as he puts it, ‘are also down in the trenches.’

He says teachers don’t always know what’s going on in a student’s home-life.

“When you’re dealing with these individual issues that these kids bring into the classroom … we’re challenged,” Murphey said. “We’re having to teach at the same time, and we have to be able to do it all,”

Murphey said. “Now many of us, we do it all. But it’s not something that just happens over night. We have to evolve into that.”

Duval male teachers will meet again in a few months, for the next quarterly workshop.

listen to the broadcast.