on October 16th, 2019 Posted By BG in Articles
By Marlon A. Walker, The Atlanta Journal-Constitution 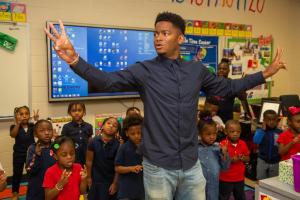 For two years as a teaching assistant in a Pre-K classroom, Johnathon Hines learned about rituals and routines and how to keep a 4-year-old student’s attention long enough to impart a lesson.

The job was supposed to be a way into the school system while Hines waited for a physical education position to come available. Those are coveted. Many who become PE teachers only give them up when they retire. Or die.

When a job finally became available four years ago, Hines turned it down.

Sticking with the 4-year-olds paid off last month when Hines was named the 2019-2020 Pre-K Teacher of the Year by the Georgia Department of Education’s Bright from the Start Department of Early Care and Learning. His new mission is to show the students that being black and achieving success does not have to involve athletics or the entertainment industry.

He is the first black man to receive the statewide honor.

“I want to show them it’s more than sports,” said Hines, 30, who teaches Pre-K at the Barack H. Obama Elementary Magnet School of Technology.

Ironic, given Hines’ lifelong dream was to play basketball, which the Towers High School product did for several years as a professional in overseas leagues.

“In the elementary schools, we don’t have a lot of male teachers in the ranks,” said Angela Thomas-Bethea, the principal at Obama. “A lot of our boys aren’t able to see men who are successful outside of sports and entertainment. Now, they have their own hero they can look up to inside the classroom. It’s extremely impactful.”

Hines is one of three black men teaching Pre-K in all of DeKalb County.

The impact is especially important at Obama, pegged as a failing school before its doors opened in 2016 based on test scores from the schools its students previously attended. Thomas-Bethea said the area demographic is largely single-parent and low-income homes. Many of the students have limited relationships with men, Thomas-Bethea said, so they did not know how to interact.

She said having Hines is a game changer. Parents see him interacting with his students and request his class for their own children.

“It’s personal for us, and we’re trying to show that good things can come out of a community that’s been written off as poor-performing,” she said. “We know (children) cannot control where they are born and who their parents are. Through his impact, we see a difference in the children. They’re communicating better, performing better. It’s just changing the whole dynamic in the relationship. And it started in Pre-K.”

As the Pre-K Teacher of the Year, Hines received a $7,500 check, of which $2,000 goes to his school, $2,500 is to be used for a classroom makeover and $3,000 is for his own use. He will travel across the state sharing best practices and other hacks with other classroom teachers.

“We’ve all been inspired by a teacher who helped us to see the best in ourselves,” Superintendent Steve Green said. “Education is not a one-size-fits-all arena. Every year brings a different group of young students with varying needs. And every school needs a teacher like Mr. Hines: one who inspires students to love being at school. This is what we want for all of DeKalb County School District students, and what all teachers should aspire to.”

Thomas-Bethea said the recognition came after state officials began recognizing Hines’ gifts. Early childhood classes get regular visits from state officials, checking in on how students are being taught and what methods teachers are using with them. She said Hines got positive marks from a state coordinator she knows as “Miss Emily,” known for being tough on educators.

“If you get a compliment from her … it’s pretty amazing,” Thomas-Bethea said, adding the coordinator had “high standards.”

In the process of changing his career trajectory, Hines went back to school and obtained a Master’s in elementary education. He realized quickly that managing a room of 4-year-olds was more daunting than people imagine.

“When I first walked into a classroom, I didn’t really understand what I was doing,” he said. “My first year, dealing with crying or someone getting hurt on the playground. I didn’t understand how to … do it on their level. I’m just thinking the kids know.”

He said simultaneously being in school and working toward his advanced degree taught him how to manage a classroom, how to organize the students and equipment and how to meet the children where they are, both behaviorally and academically.

“You’re dealing with four-year-olds and their first time in a classroom and academic and behaviors,” he said.

The state recognition is an honor for the entire DeKalb County School District, he said.

“When you set a goal – a very lofty goal – and you happen to attain that goal, it’s an amazing feeling,” he said. “My goal was always centered around basketball. Just being named a finalist was a win for me. When I found out I was one of three finalists, it was amazing. It’s for DeKalb County. It’s for Barack Obama Elementary School. It’s for this community.

“I’m still taking it in at this moment.”