on October 27th, 2013 Posted By BG in Articles
By David A. Schwartz - Sun-Sentinel Staff Writer 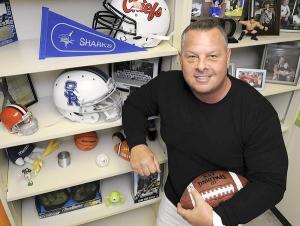 A big man, Berger works with almost 30 special needs students, many of whom have severe physical disabilities. Now the school’s “crisis intervention” teacher, Berger, 50, is respected, not feared.

“I wanted a male presence,” said William Latson, the Spanish River principal who two years ago asked Berger to take the job. “He has a good disposition with the students. The kids all know he’s the football coach.”

Berger understands, through sports, what it takes to be successful and responsible, Latson added. “He’s about the school and rolling up his sleeves and jumping in whenever he needs to.”

A few weeks ago, a boy in the cafeteria was choking, Latson said. Berger performed the Heimlich maneuver and saved his life.

“He was eating and all of a sudden he couldn’t breathe,” Berger said. Reminded that paramedics said he saved the boy’s life, Berger, his voice catching, said, “It didn’t hit me like that.” He paused. “Cross that one off our bucket list.”

Caring for special needs students is easy, Berger said. “To me it’s a walk in the park. I like to think of myself as a naturally-born caregiver.”

Berger, a divorced father who lives in Boynton Beach, is close to his 7-year-old son. And he takes care of his 86-year-old mother Evelyn Berger, a Holocaust survivor.

He remembers his mother and father Alexander, Hungarian survivors of Auschwitz and labor camps, respectively, raising him and his older brother Andy in Cleveland Heights, Ohio. His parents’ friends also were survivors, Berger said, adding that many left Hungary in the 1960s and settled in the suburban Cleveland community.

Berger moved to South Florida, where his widowed mother and older brother were living, in the mid-1980s.

He was a special education teacher at Atlantic Community High School in Delray Beach and the football team’s defensive coordinator, a position he held for six years until 1994. Berger was a special education teacher and head coach of the football team at Santaluces Community High School in Lantana for nine years until 2003. He returned as Santaluces’ head coach in 2007 for one year.

Berger moved to Spanish River High in 2008 as a special education teacher but soon was asked to coach the varsity football team, which he did for three years.