on December 3rd, 2012 Posted By BG in Articles
By Topher Sanders - Jacksonville.com 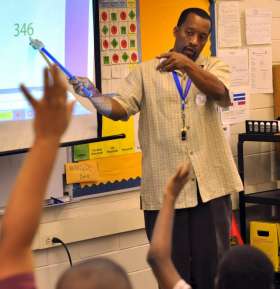 “No, he’s firm,” Shubert says of Mitchell. “And that’s what I like. Especially [for] a young black man with the way the world is today.”

“They actually need somebody to get them on track and do a little bit more than just educate,” Mitchell said of his students, particularly the boys. “So I sometimes feel more like a father. You need to give them a lot of love.”

The new Jacksonville-based nonprofit organization, Achieve Instill Inspire Foundation, is looking to make teachers like Mitchell less rare across the state. The foundation wants to provide scholarships to black and Latino men who will commit to pursuing degrees and careers in elementary education.

“The ultimate vision is to get some young men into the pipeline so at the elementary level kids can see some people in a leadership role that look like them,” said state Sen. Tony Hill, D-Jacksonville, who is helping to lead the organization.

Hill said the foundation has been in development since 2005. He cited recent reports that ranked Duval County third from the bottom of large school districts nationwide in black male graduation rates in the 2007-08 school year as an additional motivator. The school district questioned the methodology of the study, which was conducted by the Cambridge, Mass.-based Schott Foundation for Public Education, and disputed the findings.

“Young black males just do not see other African-American males in leadership and authority positions that they can relate to,” Hill said.

The organization’s board members will spend the next year fundraising and getting the word out about its effort, Hill said. The board consists of physicians, business leaders and educators.

Martha Valdes-Pellino, chief financial officer of the Puerto Rico Chamber of Commerce of Northeast Florida, said the foundation is an opportunity to break a cycle with black and Hispanic boys.

“If we don’t get our young men educated it turns into a vicious cycle of unemployment, getting into trouble and possible jail time,” Valdes-Pellino said. “So education is really the answer to preventing these teens from falling to the wayside.”

Hill said the group intends to set fundraising targets and scholarship goals in November and hopes to meet with the education deans of Florida’s historically black colleges and universities to see if they can match the group’s efforts.

The group is starting with historically black colleges because large numbers of black students attend the schools and many will go back to their communities to live and work, Hill said.

The pool of college-educated black and Hispanic men is already small and the challenge for Hill’s group is to convince those talented students to skip careers as engineers and lawyers.

Mitchell, who is one of Duval’s 70 black male elementary teachers, practiced law in Maryland for five years before he and his wife moved to Jacksonville. After the move he said he wanted to try something new.

“Once many of us go and get our degrees, we don’t necessarily think about teaching, definitely not at the elementary level,” Mitchell said. “Because of our socioeconomic status, when we go and get degrees we tend to want to better ourselves, better our family.”

To sweeten the pot, Hill said the group would like to use the foundation funds to pay black and Hispanic male elementary teachers to mentor their students as well.

Duval and Clay counties are tackling the issue with recruitment efforts aimed at increasing the pool of minority applicants for teacher positions.

“It’s important for students to have teachers who are reflective of them so they can have role models to look to,” said Jimminda Thompson, a recruiting supervisor for Duval schools. “That is a key factor in students being able to see themselves in a teaching role, or being able to relate to their teacher.”

There are about 1,480 elementary teachers in Clay County, of which four are black or Hispanic males.

The district responded to the complaint by forming a task force with the community to address hiring efforts, and in May, the district held its first-ever recruitment fair with nearly 500 applicants in attendance. More than a quarter of those were minorities.

Michael Henry, principal of S. Bryan Jennings Elementary School and one of the district’s few black principals, said the numbers were a dramatic improvement.

“We’re moving in a direction toward working together to eradicate some of the disparities,” he said.

Achieve Instill Inspire raised about $10,000 toward its cause during a kickoff event in September. Hill knows that is far from what is needed to fulfill their vision.

“A thousand miles begins with one step, for the first time in years we’re not leaving it up to government,” Hill said. “It’s going to be a slow process, but we’re in this thing for the long haul.”

Shubert, Joshua’s mother, said she is pulling for the new organization to raise a ton of money and send lots of black and Hispanic men to college so more boys can have Joshua’s experience.

“When Joshua looks back,” Shubert said, “he’ll say, ‘Yeah, Mr. Mitchell was mean, but I got my lesson.'”