on April 22nd, 2020 Posted By BG in Articles
by Zoe Nicholson - Greenville News 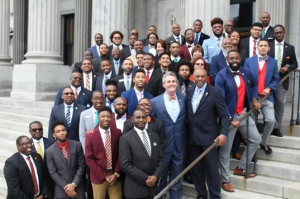 Davis was on Winfrey’s widely popular daytime talk show to receive the “Use Your LIfe” award for his involvement in the Call Me Mister program, an initiative aimed at increasing the number of black male teachers in South Carolina.

Hayward Jean was one of five Misters who sat in the front row of the audience, watching his mentor receive the award.

Jean remembers the moment Oprah turned to them, microphone in hand, asking if anyone wanted to say something. Jean couldn’t make his mouth move, he’d always been terrified of public speaking.

“And then my friend next to me, Mark Joseph, responded …”

Joseph didn’t plan on speaking, but he felt as if he was being nudged in the back, a subtle voice telling him to seize the opportunity.

For a few minutes, Joseph explained why the young group of men were there. Not there at the “Oprah Winfrey Show,” but there as Misters and future educators.

“This Call Me Mister experience was about purpose. It was about something bigger than just an individual situation or journey. This is much greater… It’s not just about you, it’s about what you’re going to do with what you have, to be able to give back and prepare the next generation,” Joseph remembered of his speech.

It was a lesson the Misters who were there that day have remembered — one they’ve carried through to the dozens of classrooms and to the thousands of South Carolina students they’ve taught over the years.

Hayward Jean is the principal of Mellichamp Elementary School in Orangeburg.

Nicholas Gillcrese is an assistant principal at Sandlapper Elementary School in Columbia.

Damon Qualls is the principal of Monaview Elementary School in Greenville.

And Mark Joseph is an assistant professor of education at Anderson University.

The “Oprah Cohort” was among the first graduates of the Mister program in 2004. At that time, black men accounted for less than 1% of South Carolina public school teachers.

Two decades later, they account for about 2.8% of teachers, according to the State Department of Education.

“The success of the program is directly linked to the success that the Misters have had,” Dr. Roy Jones, the director of the Call Me Mister program, said.

The program’s name comes from a Jim Crow-era law that made it illegal to call a black man “mister,” just one example of the ways institutionalized respect for black people was denied for decades, Jones explained.

“Like so many other ridiculous laws, it stayed on the books for a long time … but more importantly, it stayed in the psyche of black and white people in the state. So, part of the challenge for Call Me Mister is to reverse that perception,” Jones said.
A new ideal

Jones said when Clemson was developing this program, they looked at trying to break the school-to-prison pipeline for black and brown men. The way to do that, they decided, was to provide elementary school students of color with role models who looked like them.

“So my first year in the classroom, obviously, I saw the need for role models,” said Gillcrese, the assistant principal at Sandlapper Elementary.

The program also seeks to reduce racial prejudices through those role models. Although it’s changed since his first year teaching in 2004, Gillcrese experienced that firsthand.

“There was also some of the resistance that came from some families. I was in a predominantly white school … they did not see the normalcy for having a male, particularly a man of color, teach their young white kid. So it was more of a systemic mind shift,” he said.

By the end of the school year, Gillcrese said the same parents who initially expressed concerns about him were calling to apologize.
More than a degree

Twenty years ago, he understood the purpose, the “why” of what the Misters were doing as future educators, but Joseph didn’t understand the impact.

Now the Call Me Mister site coordinator at Anderson University, Joseph helps colleges nationwide develop their own Mister programs, an endeavor that helps Clemson fund the program through licensing and trademark fees.

“I just didn’t see it at that time. I don’t think any of us recognized that. I think we were just excited about being educators,” Joseph said.

The Mister program is more than providing access and equity, Jones explained.

Misters learn how to be leaders, how to give back and how to address the needs of the “whole child.”

A member of the Oprah Cohort, Monaview Elementary School Principal Damon Qualls carries the Mister mentality through all aspects of his job, especially in hiring.

At his school in Richland County, Gillcrese created the Bowtie Book Club, a small group meant for children with absent fathers to learn integrity, leadership and standing out amongst the crowd.

“One of the things my guys know is that when they left our small group session, everything that they did had to be connected to who they truly are,” the assistant principal said.

The program provides a different vision for the black man in America than what’s touted on the television or incarceration statistics.

Call Me Mister student Jaheim President has known he wanted to be a teacher since he was in third grade.

But he didn’t know how, the only examples of black men he saw in the media were basketball players, football players, rappers and prisoners.

But in February, surrounded by hundreds of Misters from across the state and country at the 20th anniversary reception, President saw a new example.

“You had heavy hitters that are principals, that are superintendents, that are professors now. So it just gives me great joy that I can become and what I will become in this program,” the College of Charleston freshman said.

‘From Oprah to Ellen’

Eighteen years after “The Oprah Winfrey Show” episode, President and Darius Smith were sitting in the front row of another talk show – The Ellen Degeneres show in Los Angeles, CA.

President doesn’t know exactly how he and Smith wound up getting free tickets to the show, but they flew out with a teacher from their then-high school in Summerville and got to attend a taping in 2019.

Degeneres invited the two up on stage with her, where Smith and President discussed their passion for teaching and the need to have diversity in front of children.
Watch Degeneres with Smith and President
After a bit, the host surprised the two students with full rides to the College of Charleston and an extra $20,000 each, but President was most excited for the acceptance letter the talk show host handed him.

A few minutes earlier, they had discussed President’s nervousness over not being accepted to the College of Charleston yet, his dream school.

“I was doing everything right and I still wasn’t getting in,” he told The News and Mail.

Four of President’s friends, all of whom are now Misters at College of Charleston, had already gotten their acceptance letters to the school.

“We may have asked them to slow the process down so we could tell you,” Degeneres told a giddy President on the show.

“If there wasn’t a table in front of me, I probably would’ve ran around the whole studio because I was just happy. Because my mom wasn’t able to go to college. So this was a big moment for not just me, but for my mother as well,” he said.

Since their appearance, President and Smith began their freshman year at the college and in the Call Me Mister program.

The work is hard, but it’s worth it, President said. And he’s not alone. Misters from South Carolina State, Clemson and Coastal Carolina have become President’s brother, bolstering him through a year of transition.

Zoe covers Clemson for The Greenville News and Independent Mail. Reach her at znicholson@gannett.com or Twitter @zoenicholson_