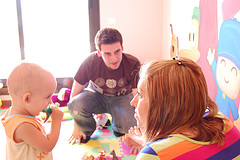 Anthony D’Tiole, 20, of Moraga, Ca. says when he first started out, he had to work harder to get the jobs that came easily to his female counterparts.  “They might have five interviews and be offered four jobs,” he said, “I’d have 20 interviews; and if I was lucky, I’d be offered one position.”  D’Tiole is a male child care provider, a male nanny, a “manny.”

“If we want truly egalitarian parenting and society as a whole — shouldn’t that include men in nurturing roles?,” asks Elisa on the blog Mother Talkers.  While men only make up 1% to 10% of paid nannies nationwide, and about 5% of licensed child care providers, a higher number of casual, unpaid caregivers of adults and children are men.

The New York Office for the Aging reports that 39% of the caregivers aged 18 and older who provide unpaid care to another adult who is 18 or older are male. Some unpaid male caregivers are caring for special needs children.  According to the National Alliance for Caregiving in Collaboration with AARP, Caregiving in the U.S. 2009, men comprise 28% of unpaid caregivers of these children.

D’Tiole attends St. Mary’s College, has experience as a camp counselor, and plans on counseling children of divorce one day.  “I start with, ‘I know you were planning on hiring a female, but let me tell you the benefits of having a male role model,” he said, “Once they see how good I am with kids, and the children insist on having me watch them, I get a lot of callbacks.”

Gloria Steinem told the Marin Independent Journal in 1995, “[I]f, as children, whether we’re boys or girls, we’re raised mainly by women, then we deeply believe that only women can be loving, nurturing, flexible, patient, compassionate, all those things one needs to be to raise little children, and that men cannot do that, which is a libel on men. Of course men can do that.”

“There are parents who hesitate to hire a male nanny,” says Dave Culp, franchise owner of  College Nannies & Tutors in the San Francisco Bay Area and Rookie of the Year, “But once they give them a chance, what we’re seeing nationwide is that they’re the most in demand.”

Along with baking cookies with the children, straightening up the house and helping with homework, male nannies can provide a more adventurous experience for children.  While women are more nurturing and protective, men encourage children to push their boundaries, to take risks.  And the benefits of male role models extend beyond the playground.   While women tend to comfort frustrated children, men usually encourage them to deal with frustration.

D’Tiole reports there were five men in his last child development class.  He entertained children by applying temporary tattoos during Green Valley Elementary School’s annual Family Fun auction, in Danville, Ca, Friday evening.  D’Tiole worked alongside two female colleagues from College Nannies & Tutors.  Asked if he noticed any unusual reactions by parents to seeing a male nanny, he said, “One parent said, ‘I like the fact that you are a male who enjoys working with kids.”