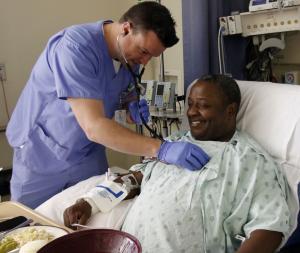 A typical work day for East Alabama Medical Center nurse Charles Smith can consist of extreme emergencies, the stabilization of patients, collaborating with co-workers, educating families about medical conditions and anything that has to do with saving a life.

On some days at the intensive care unit, he might even be referred to as “doc.”

“I’ve been mistakenly identified as a doctor more than once,” he said. “Sometimes I go into a room with a female nurse, and a patient says ‘hey doc.’ The way it appears, you tend to see more men in the emergency room settings. In ICU we have a pretty good mix of men and women. About a third of the staff is men.”

As a nurse, Smith is among the men in Alabama and Lee County who have careers that have traditionally been dominated by women.

In Lee County, men occupy 40 percent of jobs in education, legal, community service, arts and media areas; women occupy 60 percent. In the healthcare practitioner and technical occupations, men make up 23.2 percent in the county, and women are the remaining 76.8 percent, according to the survey. In sales and office occupations, 43.3 percent of men hold positions. Women take up 56.7 percent.

Tal Peretz, Auburn University assistant professor of sociology and gender studies, said there are still employment fields that are dominated by men or women.

“Women have been successful in making their way into more fields over the last 50 years, but there are some jobs in STEM fields, unionized manual labor and policing where they still face a lot of barriers,” he said. “Men also still face barriers when moving into women-dominated fields, though these are more about pressure to conform to masculinity norms than about other people working to keep them out.”

At the end of the day, there’s no gender for saving lives, Smith said. He said he’s never had a more fulfilling job, and when he leaves from work he holds his head high.

Nursing wasn’t his first career. Smith held positions in sales and construction, and he was once a paramedic.

“I had traditional male jobs,” he said. “I circulated through jobs, but couldn’t find my niche. The motivation behind becoming a nurse was I had family members that became sick. I didn’t understand why that happened, and I wanted to know why. We had some medical issues in the family, and I wanted to know what was going on. I gave nursing a shot, and I fell in love with the process of everything. I have a great amount of passion for working at EAMC.”

People work in careers or jobs that fit into their lives, to the best of their abilities, Peretz said.

Being a male in a traditionally female career field does present some challenges for men, he said.

“Men do face challenges in women-dominated fields, though they are rarely what you’d expect,” he said. “They mostly have to do with being pressured to conform to masculinity norms. For example, when men work with small children, they are more likely to have their interest in nurturing work questioned. They face extra scrutiny as possible sexual predators.”

As a man in nursing, Smith said he hasn’t faced any challenges, but he has encountered issues as a nurse in general.

“Stereotypically, men are not as emotional as women, but it shakes us to the core if we lose a patient or give out bad news. That’s the hardest part,” he said. “Gender doesn’t play a role in that. We’re all wired differently, but it does affect us.”

When all is calm and patients are stable, Smith said, he and his co-workers like to chat at the nurses’ station about anything from families to pastimes. At times, he and some of his colleagues are on different pages when it comes to casual conversations.

“There’s definitely a learning curve for being the only guy on staff, as compared to working with men. Most of the women are talking about Pinterest, Instagram and family. Every time I brought up sports, it was foreign to them,” he joked.

“Usually when I’m talking about sports, some of my colleagues don’t get my sports metaphors,” he joked.

And then there are the pregnancy stories he can’t grasp or understand.

“Here [West Forest Intermediate] we’ve had six or seven babies born,” he said. “Teachers would be talking about pregnancies, and that’s really not my forte,” he joked.

Dawson isnt fazed by the conversations he drops into, considering he is the only male teacher at the school.

As a boy he dreamt of having a career as a sports star. A career as an educator was far from his fantasies, until he reached the end of high school and the beginning of college.

“I saw the positive influence my teachers and football coaches gave me, and I wanted to give that to younger generations,” he said.

More men might not be at the chalkboard like Dawson and other elementary teachers because they have decided to take on higher-paying jobs, he said. Dawson doesn’t consider teaching in general to be a woman’s job.

“Teachers are underpaid, and some men might go to college to support their families,” Dawson said. “With it being education, there needs to be more males because a lot of students don’t have that male role model in their lives.”

Careers that used to pay working men enough to support their families are now mostly done by machines and technology, Peretz said.

“A lot of our conversations about jobs lately are really flawed,” he said. “We talk about one group taking another group’s jobs, or moving into a field that was traditionally held by another group. The biggest motivators of job losses and changes in employment are about technology and corporatization.”

He said men in female-driven careers are often encouraged, lauded and promoted, as research from sociologist Christine Williams showed. On the other hand, they might experience negative treatment from people trying to place them back into stereotyped masculinity.

Dawson doesn’t care about any stereotypes. He said he gets his joy from his 22 students, and the examples he sets forth.