on December 13th, 2010 Posted By BG in Articles
by Jenel Few - SavannahNow 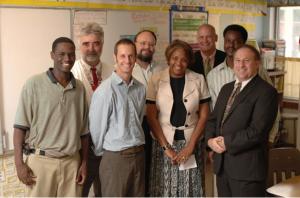 Education, particularly in the early grades, is a woman’s world. Although the number of male teachers is growing, they still make up just 19.3 percent of all teachers in Georgia, according to the state Professional Standards Commission.

Of the 2,700 classroom teachers in Savannah-Chatham public schools, 500 are male.

“I don’t think they like dealing with the babies,” said Alfreda Goldwire, president of the Savannah Federation of Teachers.

From the principal’s office to the cafeteria, it is not uncommon to find some elementary schools staffed entirely by females. But with six male teachers and a male custodian, Bartow Elementary by comparison seems to be overflowing with testosterone.

She said each male staff member adds something special to the learning experience at Bartow.

“There’s a different type of interaction,” she said. “Maybe it’s just being able to talk to them man-to-man.”

Path to the beginning

Teaching wasn’t Joel Worth’s first calling. The third-grade Early Intervention Program teacher was a chef for more than a decade before he went back to college and earned a degree in education. He realized there was a need for male teachers on the elementary school level when he did his student teaching in an elementary school.

“I could hear them whispering down the hall that there was a man in the building,” Worth said.

“I enjoy knowing I’m giving them their start in music,” he said.

Dan Ailes, a third- and fourth-grade gifted specialist teacher, has taught at Bartow for 20 years. He decided to teach at the elementary school level because the children touched his heart.

“A kindergartener came up to me and asked if I would be his daddy,” Ailes said.

Second-grade teacher Richard Hall said he chose elementary grades in part because his wife, a high school teacher, told him all about her experiences with teenagers.

“This is a start for them, and I think we need to catch them while they’re young,” Hall said.

The male teachers said they nurture their students differently than many of their female peers.

John Klaras, an unconventional third-grade teacher, substitutes hugs and hand holding with action and adventure. He uses his background in the sciences and love of nature to inspire his students to think outside the box, get their hands dirty and see how they can apply everything they learn to real life.

“I don’t baby them,” he said. “Anything I learned in college I can teach them, and they can get it.”

Sam Rosenberg looks and sounds more like a motivational speaker or an advertising pitch man than the typical second-grade teacher. His energetic approach keeps students excited about learning.

“I love it when they finally get something and you can see the smile come across their faces,” he said.

Rosenberg goes all out to find ways to reach and relate to each student – from making home visits and discussing their sports heroes to listening to as much rap music as he can bear.

“It’s great to be in his class. It’s wonderful,” said Steven Perry-Johnson. “He goes outside and plays games with us, he makes everything fun in the classroom and we never have to do girlie stuff.”

Principal Walker-Zeigler takes every possible advantage of the male presence in her building.

Custodian Edward Rhett serves as a role model to students, too. He’s taken several male students under his wing and keeps up with their behavior and academic progress. Rhett said it is a special responsibility and he doesn’t mind being singled out because of his gender.

“I love being around all these women.”