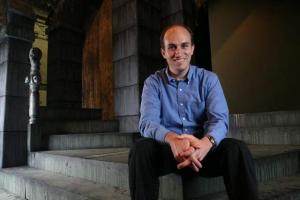 In his first year of teaching, actor Will Ragland could always count on a standing ovation in the Bryson Elementary School cafeteria.

“You walk in, and it’s like Caesar coming home from a conquest,” Ragland told The Greenville News then, in a profile about male teachers entering the field through a program for professionals with degrees in areas other than education. “The whole crowd erupts, and they start waving, everybody at once.”

On Friday, the popular teacher and community theater actor got an honor rivaling some of the best standing ovations he’s received at local theaters. A decade after entering the field, Ragland was named Greenville County Schools 2012-13 Teacher of the Year.

At Bryson, Mr. Ragland, the related arts teacher, was the guy who made learning about the primary colors fun for kindergartners and first graders, the creative teacher who took over a vandalized portable and painted it “Smurf blue.”

For the past four years at Woodmont High, he’s been the teacher and theatrical director who turned a rural high school with a beautiful auditorium and no theater program into a place where teens sell out Christmas shows and, as he said Friday, “become rock stars.”

The elementary school cafeteria ovation was once the highlight of his week shortly after he graduated from Davidson College in 2000 as an art studio major.

Now, the Wren High School grad is teaching the children he taught before their permanent teeth came in.

“I had no clue what I was going to do with my degree,” Ragland told GreenvilleOnline.com after the announcement Friday. “You think you have a plan for your life, but God has a plan for you — and it’s better than what you had in mind. I’ve found you discover where you’re supposed to be.”

Ragland was introduced to the opportunity of teaching through the school district’s Program for Alternative Certification for Educators (PACE), which allows teachers in special-needs areas such as art and science to earn certification while on the job.

“I thought, ‘This is ridiculous, none of these kids see plays,’” he said.

The kids at Sue Cleveland seldom had the chance to see the shows he performed at the Warehouse and other community theaters, so he put together an “Alice in Wonderland” show in the cafetorium and cast 60 kids and teachers. Later, he tackled “The Wizard of Oz,” casting 115 kids, a dog and his principal as the Wicked Witch of the West.

The shows sold out, so he took the act to the newly constructed Woodmont High School, where the administration told him that despite a brand new auditorium, the high school had no theater program.

Soon, in 2007, Ragland took a job at Woodmont to establish a theater program. This spring, the school’s production of “Grease” was highly praised and played to sold-out crowds.

Ragland was selected from among 10 finalists, and he will have a chance to compete for state teacher of the year.