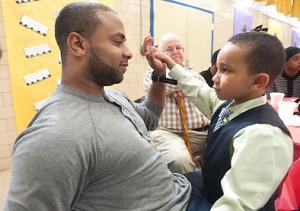 Sixth-grader Elijah Brown’s blue dress shirt bagged out over his beltless khakis inside the cafeteria at Forest Heights Elementary School. The loose look may have been a style choice, but it also was clear that Elijah had some room to grow into those dress clothes.

Elijah was dressed up for the third annual “Boys 2 Men” event at the school March 3 — an annual program its creator says is designed to help young men such as Elijah, a 12-year-old Oxon Hill resident, learn how become the right kind of person.

“We’re growing up and we’re maturing and people, like our parents and stuff, like male role models, they come and they help show us what a man looks like and how to act like a man,” said Elijah, who was joined at the program by most of the school’s 113 boys and approximately 85 of their fathers, stepfathers, grandfathers, uncles and other male mentors.

Included in the event are a luncheon and a keynote speaker. This year’s event featured motivational speaker Clifton Coates, who asked the boys to repeat: “If it is meant to be, it’s up to me, and if I don’t stand for something, I’ll fall for anything.”

Coates, who donated his time, told the boys that life is about respecting others and yourself and that it’s important to heed the advice of the successful men in their lives.

The two-hour event provides the men and the boys a chance to talk about what it means to be a successful man. In addition to speeches, the participants are encouraged to discuss questions such as, “What do you like about your dad, grandfather, etc.”

Victor Turner, a pre-kindergarten teacher who cofounded Boys 2 Men with music teacher Charles Robinson, said the approximately $2,500 annual program is funded entirely by donations and grants, adding that he hopes it triggers regular visits into the school by male figures. About a dozen of the estimated 80 to 100 men who attended this year’s event pledged to make monthly visits to the school.

“Sometimes [boys] don’t see positive role models, someone to emulate,” said Turner, 52. “They can talk about it, you can read about it, but this lets you see an actual person.”

Every boy in the school participates in the program, Turner said, adding that the men’s participation has held fairly steady for the three years. In the future, he’d like to see monthly weekend fieldtrips or evening events that bring the boys and men together without taking time out of the school day, he said.

John Cheathem, 53, came to the program in support of his grandsons, third-grader Javon, 9, and first-grader Jaion Benson, 6.

“By having these kids look at another man doing the right thing, then they’ll begin to follow that trend also,” Cheatham said. “By them seeing me getting up every morning and going to work, I’m trying to set an example for them.”

Javon said he was just happy to have his grandfather come to school for the special event.