on May 14th, 2013 Posted By Bryan G Nelson in Articles
By Nisa Islam Muhammad - The Final Call 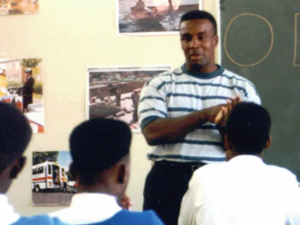 Spend an hour at Maya Angelou Public Charter Middle School and you immediately notice something’s different. There’s an abundance of Black men and they’re not just custodians or security.

“We are the counselors, the teachers and the principal here,” explains La’Mont Geddis, the school’s head man in charge. “Students see us in different positive roles. Black men can do anything and that’s the message we get across to our students. People died for me to become a principal and I’m it.”

“When we’re not in the classroom, we’re allowing others to teach our children. That’s our job. We have to bring back the fact that we are our children’s first teacher. Teaching is a ministry. We change lives. We rebuild structure in the classroom that may not be at home. We teach manners and culture. We teach respect.”

Black and Latino students make up 35 percent of public school students across the country. Less than 15 percent of teachers are Black and less than two percent of that number is male.

Many educators see this severe lack of Black male teachers as contributing to the crisis Black boys face in schools.

According to a new report by the Council of the Great City Schools, Black boys are facing incredible challenges. “Black males continue to perform lower than their peers throughout the country on almost every indicator,” warns “A Call for Change: The Social and Educational Factors Contributing to the Outcomes of Black Males in Urban Schools.”

“The issues that emerge from the data are both moral and economic, calling into question the nation’s ability to harness all of its talent to maintain a leadership footing in the world,” said Council executive director Michael Casserly. “How can you narrow or close the country’s Black-White achievement gap when African American males are not getting the attention and support they need to succeed?”

The study focuses on six areas of the lives of Black males:

“The Honorable Elijah Muhammad placed a great deal of emphasis on Black teachers teaching Black children. The need for Black male teachers, in my experience, is a great plus. I have served as an elementary teacher, middle school teacher and principal at the high school and now K-12 level, both public and private schools,” said Dr. Larry Muhammad, national director of Muhammad University of Islam.

“I have often been the only Black male in schools and one of few males. It has a great impact on children, male and female, but certainly the Black male. They are often so conflicted with their identities and how they should carry themselves that it’s refreshing to have a Black male present, but it takes an adjustment.”

He added, “ Sometimes they are so used to not having a male presence, I’ve actually seen rebellion to the male presence, but once they build a relationship it really empowers boys. Those who are at-Risk are most empowered because they have all but given up until they run into a Black male who is professional and an exemplary role model.”

“Why should a Black man be a teacher? Teachers are not the cool people; they’re not popular; they don’t make a lot of money and it’s not a glorified position. What we are is responsible for making a difference in the lives of children. I’ve created a different culture here at Maya and I’m liking it. The brothers here are doing a heck of a job everyday.”

“I tell them to love their students through their undesirable behavior. Just as we would advocate for our own children. I tell my teachers to advocate for their students in the same way.Our students already feel like they’ve been thrown away. So instead of suspension we assign them a mentor and give them an extra day of school,” Mr. Geddis told The Final Call.

“A research study was done years ago in a prison in Florida where the inmates had to write thank you or birthday cards on Mother’s day and all participated, but come Fathers day there was very little participation,” said Dr. Larry Muhammad. “The male presence is being severely altered in this society. Black male teachers could be an answer to much of our problems as long as they are committed and holding a high expectation and standard for children.”