on June 1st, 2017 Posted By BG in Articles
by Judy Woodruff - PBS Newshour 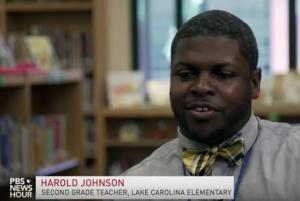 JUDY WOODRUFF: A question that has been raised here: Why aren’t more men going into fields dominated by women?

Stigma is a big part of the answer, our economics correspondent, Paul Solman, reported last week.

Tonight, he focuses on one man many might want to emulate.

HAROLD JOHNSON, Second-Grade Teacher, Lake Carolina Elementary: We already got a man outside, and I need you to be outside, especially at will linebacker.

PAUL SOLMAN: Amos Myles is the bad cop. But Harold Johnson isn’t exactly the good one.

PAUL SOLMAN: Pretty much every high school football coach is a guy, of course. And men are no rarity in secondary school classrooms either.

ANGELA BAUM: So, between 1 percent and 5 percent of early childhood teachers are male.

PAUL SOLMAN: Do you guys like having a man for your teacher?

PAUL SOLMAN: Their teacher is Harold Johnson, the linebacker coach, whose main job turns out to be running this second grade classroom, after six years teaching kindergarten.

Early education teacher is a job for which, given the labor market for men, especially in the South, qualified guys would be hired right away. Harold Johnson has taken advantage ever since college.

HAROLD JOHNSON: I just decided I wanted to be an early childhood major.

PAUL SOLMAN: Smart move, he learned, as good male gigs were proving ever harder to come by in the wake of the crash of ’08.

HAROLD JOHNSON: The dean of the colleges came in to just greet all the freshmen and stuff, and he kind of walked in, and he looked around, and he was giving his speech. He just stopped me. His speech was like, hey that guy right there is going to get a job before all you all.

And so I just laughed. And I’m looking round, like, me? And he was just like, yes, it’s you.

HAROLD JOHNSON: Everybody looking like, hey what you doing here? You know, this isn’t P.E. or anything. And I’m just like, I know. It’s reading and how to teach kids how to read. And that’s what I’m here for, to learn that. So …

PAUL SOLMAN: And then they get embarrassed, I assume?

Especially when I was a kindergarten teacher, it was definitely like, nobody could believe it. It was just like a, ahhh, kind of sympathetic kind of situation.

PAUL SOLMAN: So is there something different about him? Well, he’s patient, more patient than fellow coach Amos Myles perhaps.

But even the ever so macho Myles says:

AMOS MYLES: I think patience is key. With that, you have to have patience with kids. It doesn’t matter what level you’re on.

STUDENT: I really love my country.

PAUL SOLMAN: You don’t think there’s a difference in the patience required to be a kindergarten teacher, as opposed to, say, a TV journalist?

HAROLD JOHNSON: I personally don’t. I just feel like you got the patience for what you got patience for. You hold them to a high standard, then they will perform.

So I think it’s just — the mind frame of going into it is one thing. People say patience, but I think it’s not really patience. Just, you got to teach what you want to happen.

PAUL SOLMAN: So what Johnson seems to have is a different mind frame.

HAROLD JOHNSON: I feel like that one thing people just having the wrong impression. Just, oh, they’re little kids, they’re dirty, they got snot hanging out, they don’t know how to tie their shoes, they always ask for something, always whining.

And I always tell them, OK, I’m pretty sure you have got a co-worker there always asking you for stuff, that’s always aggravating, that always, maybe not being dirty, might have snot running out their nose too.

She was too smart at that school. She don’t have any way to help her.

PAUL SOLMAN: In fact, what struck me after spending a day with Harold Johnson is that, while he’s exceptional at his job, he’s much like the best side of any of us, and his gender is a help, not a hindrance.

STUDENT: Boy teachers are more nice, and they understand more, and they’re not as mean as girl teachers.

PAUL SOLMAN: They understand you better because you’re a boy and they’re men?

PAUL SOLMAN: Now, girls, in my experience, are lots of fun. So, I have two daughters. They’re a lot of fun. So why is the boy teacher more fun than the girl teacher?

STUDENT: Because boys do more awesome stuff than girls.

PAUL SOLMAN: On behalf of you girls, I do not think boys do more awesome stuff than girls.

But educator Angela Baum says male teachers do bring something different to the table, or to the floor.

ANGELA BAUM: Some experts suggest that perhaps men play with children differently than women do. So, men may be more likely to engage in what we call rough-and-tumble play. That’s that vigorous chasing, wrestling kind of play. And that’s good for young children, both young boys and young girls.

PAUL SOLMAN: There’s one last aspect of Johnson’s teaching worth mentioning, especially for a Making Sense segment. He teaches economics to second graders, including lessons in managing a work force.

HAROLD JOHNSON: We did supply and demand, and then we talked about wants and needs. We brought the materials to make something, so they had instructions. So one was a sugar cookie, one was some cocoa mix, one was a winter mix. And so they had a factory assembly line.

So, then they really got frustrated with the middle people. I asked them, well, how did that feel? And they was like, man, that’s hard work. There’s a lot of pressure on you.

And I was like, and imagine, you all was making sugar cookies. Imagine if you really was doing something, building a car or something. So, we talked about that.

PAUL SOLMAN: OK, one last question for those men out there who might possibly be considering if this job is for you.

How gratifying is this work?

I think the thing that I enjoy the most is when you see a kid have the aha moment or either change their whole perception of something. Like, I have seen boys who hated reading are running to go read first.

And so it’s just like, man, you know, I had something to do with that. Or if I can take this 180 days and make a lifetime of difference, then that’s all worth it. That’s all worth it for me.