on August 16th, 2009 Posted By BG in Articles
by Amanda Millard - Gaston Gazette 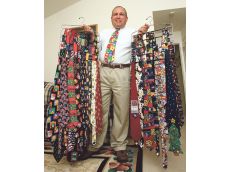 Ghost ties come out in October.

“I probably have about 30 Christmas ties,” he said.

McAllister didn’t start out as a tie wearer.

“It really happened when I started teaching in the early ’80s. I probably owned four or five ties in my entire wardrobe. I started buying a couple ties here or there, and, of course, at Christmas I started getting ties from the children,” said McAllister, who teaches first grade at Gardner Park Elementary.

After 27 years of teaching and hundreds of tie-bearing Christmases, McAllister has amassed quite a collection.

“I could wear a different tie every day,” McAllister said. “I probably have three (hundred) or 400. I have them hanging in my wall in my closet.”

The teacher has his favorites that he wears more than once.

“I always like the ones that the kids give me,” he said.

McAllister has a cow covered tie to go with the lesson.

“I try to match them occasionally to what we’re studying,” McAllister said.

The ties often attract attention from his students.

McAllister has worn all of his ties at the same school.

“I’ve been teaching at Gardner Park for 27 years. This is the only school I’ve ever worked at,” McAllister said. “I’m kind of a fixture here, just like the walls. It’s just like home.”

The 52-year-old isn’t sure what he’ll do with his ties when he retires.

He might keep them or give them to someone who could use them.

McAllister decided to be a teacher because of his love for school and learning.

“It was just the right profession for me,” McAllister said. “Young children have that burning desire to learn. They want to experience new things.”

Being a man at a teaching level dominated by women doesn’t bother him. He said more men are needed to teach the early grades.

“A lot of children don’t have male role models,” he said.

McAllister said he didn’t feel awkward being one of the few males at the elementary school level.

“They’re just like my sisters. I don’t even see them as female,” McAllister said of the women he works with. “After awhile you don’t even think about it.”