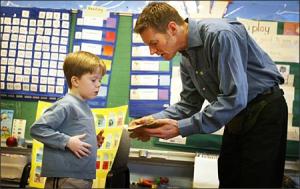 When third-grade teacher Andrew Bean wanders by female colleagues who have stopped to chat about a co-worker’s pregnancy, he’ll joke, “How ’bout those Seahawks?”

“You’ve got to have a sense of humor about it,” said Bean, the only male classroom teacher at Fairmount Park Elementary in West Seattle.

In Seattle, about 20 percent of elementary school teachers are men.

He doesn’t really mind being a man in a profession dominated by women — but he’s a bit sensitive when anyone refers to his job or his classroom as “cute.”

His job, he said, “can be exhausting and very demanding, but I see it as this constant intellectual challenge … you have to be constantly thinking on your feet.

“I wish that could be understood and honored and respected,” he said.

Bean is something of an anomaly in Washington, where fewer than one in five elementary school teachers are male.

About 70 percent of the state’s teaching corps are women, though experts say more men are beginning to join the field, thanks in part to recruiting and increasing numbers of men who choose to switch to the profession midcareer for a more fulfilling job.

Though there are more men teaching in the state than there were 20 years ago, finding men to teach in elementary schools is still a challenge. In Seattle, about 20 percent of elementary teachers are men, a bit higher than the statewide average of 17 percent.

Men who work for public school districts tend to take jobs as administrators — 81 percent of superintendents are male — or as classified workers such as laborers, mechanics or tradesmen, according to statistics from the Office of the Superintendent of Public Instruction.

The small number of male teachers, especially at the elementary school level, “is a problem in the same way we don’t have enough minority teachers for kids to connect with,” said Jeanne Harmon, executive director of the non-profit Center for Strengthening the Teaching Profession.

“It’s a big problem when kids don’t see themselves reflected in the teaching staff.”

Students could benefit by seeing more men in the classroom, and for some students, especially those from single-parent homes, a male teacher at school might be the only positive male role model in their lives, she said.

Yet at the University of Washington, usually only 12 percent to 15 percent of the students coming through the elementary prep teaching program are men, said Karen Harris, the program’s field coordinator.

The men who do go into education are more likely to seek teaching jobs in middle or high schools, where they can specialize in a specific subject and work with more mature students to help them grasp advanced concepts.

“A lot of the job of teaching in an elementary is about nurturing, and it seems to draw more women for those reasons,” Harris said.

Another factor could be simple economics. Teaching isn’t known as a high-paying field, and male and female professionals who might consider it could be reluctant to give up a more lucrative career in the private sector.

“The pay is a big piece for men,” Harris said. “Better pay would make a big difference.”

Men who want to teach in the Puget Sound region also have to contend with a fierce job market, said Harvey Deutsch, a Seattle Public Schools recruiter.

Last summer, during the height of the hiring season, the district received nearly 100 applications for almost every teaching opening it advertised, he said — and men were only a handful of those applicants.

Districts and colleges of education can try to recruit males to apply for open positions, but they don’t get any preferential treatment during the hiring process.

“We’ve got six colleges in the Seattle area that are producing teachers,” Deutsch said. “Every year, there are teachers who are graduating that aren’t getting jobs.”

Joe Bailey-Fogarty hopes there’s a job available for him in the area when he graduates from the UW’s elementary prep program next year.

He was midway through a career in theater administration when his wife, a teacher at Ingraham High School, urged him to follow up on his longtime dream of becoming a teacher.

He entered the UW’s program last winter, and his experience student-teaching at Loyal Heights Elementary in northwest Seattle has only reinforced his desire to become an elementary school teacher, perhaps to fourth- or fifth-graders.

“Little kids are the best,” he said. “They’re unbridled in their curiosity and their joy — and they’re very direct and honest.”

Veteran educator Kevin Gallagher agrees. After nearly two decades as a high school and special-education teacher, he switched to teaching kindergarten and has been at Sacajawea Elementary in northeast Seattle for the past four years.

Managing a class full of 5- and 6-year-olds can feel like herding cats at times, he admits. But Gallagher says he’s happier now than he has ever been before in his career.

At times, it has been difficult. At one of his first jobs in New York, male teachers were expected to keep the door to their classrooms open at all times — an unwritten policy that didn’t apply to female teachers.

In another teaching job, parents complained to his bosses that his hair was too long.

“There’s just that extra eyebrow that gets raised, or someone who wants to sit in (on the class) the first week,” he said. “People, point blank, would say, ‘Why exactly do you want to spend time with children?’ ”

Attitudes in recent years have shifted, and most parents are much more welcoming of male teachers today, Gallagher said.

Now, parents realize he has a real skill for teaching kindergartners — a group of students who demand extreme patience.

Students’ attention spans are notoriously short, and teachers must repeatedly stress the basics: how to form a line for recess, how to share, why it’s important to keep their hands and feet to themselves.

The children never lack energy, though, and Gallagher thrives on the unpredictability of each school day and the excitement his students have for learning. At no other time are you in a better position to shape students’ lives, he said.

He proudly points to his classroom wall, where he’s posted high school graduation party invitations from former students — evidence that even 12 or 13 years later, students still fondly remember him and the effect he had on their lives.

The “glamour quotient” of his job may be low, he says, “but the payoff is incredible later on.”