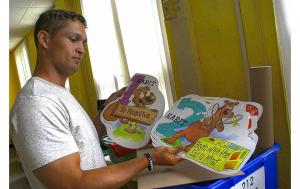 Grant Jones, 22, will teach about 20 kindergartners when classes begin Aug. 13. He will be the only man among 25 kindergarten teachers.

Jones said he knew when he was a kid that he wanted to become a teacher.

“With the younger ones, they’re ready to learn,” he said. “It’s fun for them. When you see them loving what they do, it’s fun.”

Jones recently graduated from Ohio Dominican University with a bachelor’s degree in elementary education. He did his student teaching last spring with some Jefferson Elementary first-graders.

“I graduated with an early-childhood reading endorsement,” he said. “I have a lot of experience in the lower grades. I’ve been involved with the younger kids. It’s a good time. It’s nice to see improvement so fast. You see a lot of growth. I’m excited.”

In addition to student teaching in Gahanna, he also spent time teaching second-graders at Columbus Public Schools for a methods class.

He said the first few days of class at Jefferson would be spent making the youngsters feel comfortable.

“We’ll get to know the kids and make them feel comfortable,” he said. “We’ll see how they react to the school system.”

He might use his love of Disney World as an ice-breaker with his students, he said.

“I usually go every other year,” he said. “It’s the inner child in me. I just went this summer. I have some stuff for the classroom. When I talk about Disney, (they will relate).”

The Washington Court House native said he wants his students to know he cares.

“I care for them and their education,” he said. “I want to see them grow.”

“We have a young staff,” he said. “It’s very lively. Our principal likes new ideas and getting stuff done.”

“You determine if you like school or not,” he said. “A teacher can have an impact on that right off the bat.”

Jones said teaching runs in the family, as his mother is a third-grade teacher specialist at Miami Trace.

In his free time, Jones said, he enjoys golf.