on October 16th, 2011 Posted By BG in Articles
by Lane Moore - Jezebel 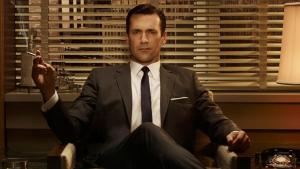 Get ready to fall even more in love with Jon Hamm. Seriously. There are new levels of adoration for this man and we’re about to discover them together.

Hamm was recently a speaker at the Rape Treatment Center benefit brunch in Beverly Hills where he spoke about his pre-Mad Men employment history — which we will refer to as phase one of your ever-deepening affection.

Apparently, the man behind Don Draper is a former high school teacher and also worked at a daycare center. Hamm said he’s always felt very connected to children, which he attributes to being the child of a single parent —and thus spending “the majority of my life in daycare, after school programs, summer school programs,” which brings us to phase two:

AND THEN —in what is both phase three and also such an important message that is rarely discussed by men, especially in entertainment— Hamm makes a point of talking about how important it is to reach out to young boys and men and educate them on the “lasting impact of rape”:

All lighthearted jokes about love-deepening aside, this is such an important message and I’m so thrilled he was able to send it.

Rape is not a female issue. Rape is everyone’s issue, which is why it’s often an incredibly powerful thing to have a man stand up and say that. Obviously, I’m not saying it’s any better or worse or that one’s ability to be taken seriously has to be tied to gender but in terms of reaching a larger audience of men, I do think that there’s something powerful about a man —especially a widely respected and beloved man such as Hamm— standing up and encouraging other men to educate themselves and their sons on what they can personally do to prevent rape, instead of continuing to simply tell women to protect themselves or “dress differently” (ugh).

I wish we were at the point where hearing this message coming from incredibly strong people of any gender was enough, but I really feel like we need to be hearing these messages from everyone so that people realize that rape isn’t simply a women’s issue or a heterosexual issue. It truly is everyone’s issue.

Hats off to you, Jon Hamm for shedding light on this fact. And being super, super crazy dreamy.